All 32 have learned their fate for the upcoming World Cup. There will be some interesting matches played, including a glamour tie between reigning European champions Portugal and fierce rivals Spain. There were no outright ‘Group of Deaths’ but there were still some more competitive ones and we will go through each of them. 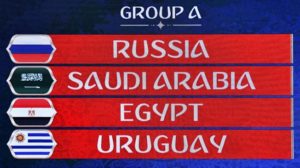 This will be considered a favorable draw for the Russians, baring in mind the other possibilities that could have occurred. With that in mind, they are still lacking in quality – the lowest ranked team in the competition- and could struggle to get through the group. Uruguay are an experienced World Cup side, and Egypt have had recent success in the African Cup of Nations. Even Saudi Arabia will be a tough test, given the confidence they will be playing with after qualifying for their first tournament since 2006.

And as such I predict Russia to come third in their group, with Uruguay and Egypt completing the top two. Saudi Arabia will struggle to get any points and finish fourth.

Russia will face Saudi Arabia in the first match of the tournament, at Moscow’s Luzhniki Stadium. Based purely on rankings, it will see the two weakest teams in the tournament face-off. This will take place on Thursday 14th June marking the start of the 21st World Cup. Russia will then make-do against Egypt a few days later, before wrapping things up against Uruguay- the highest ranked team in the group- on the 25th June. 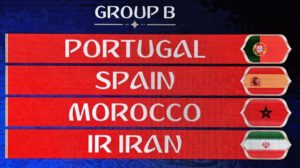 Portugal will aim to become only the fourth nation to win the European Championship and World Cup back to back but they have been drawn in one of the toughest groups of the competition. They will be fighting it out with former World champions Spain, a defensively resolute Iran, and an unknown morocco side. Portugal vs Spain should be the deciding match between who finishes first and second but Iran have had a brilliant defensive record during qualifying and will be a tough nut to crack for both teams.

Spain will have too much quality for all three opponents and finish top, which will leave Portugal and Iran to battle it out for second place. The Portuguese may just edge it due to their experience at this level, and Morocco will have an enjoyable but unfulfilling cameo appearance.

Carlos Queiroz’s Iran have been drawn against his native Portugal, as well as Spain and Morocco in Group B. Their first match of the tournament will be against 40th ranked Morocco on the 15th June- the same day as Portugal’s mouthwatering tie with Spain. Iran will then face Spain on the 20th June before finishing their group campaign against Portugal on the 25th June. Queiroz will be up against a number of former players from his time at Manchester United and Portugal, most notably Cristiano Ronaldo. 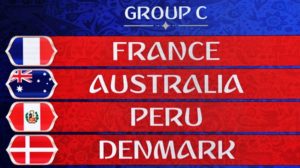 France were favourites for the tournament before the draw was made, and will be looking even stronger now. All three of their opponents qualified through playoff ties and lack the quality to cause real issues. Denmark, however, do possess a danger-man in Christian Eriksen and will be quietly confident of making it through the group. Denmark are as reliant on Eriksen as Australia were on Tim Cahill, who could feature in his fourth and final World Cup this summer. He is not the same outfit he once was and the Aussies may struggle as a result. Peru are another one of the unknown entities at this tournament, having failed to qualify for these championships for the last 36 years.

France should comfortably finish top of the group, with Denmark being their main competitors. The Danes will finish as runner-up, just ahead of the Peruvians with the Aussies languishing at the bottom after failing to pick up a win.

France take on Tim Cahill’s Australia in an early European start on 16th June, before the battle for second takes place that evening. France will then take on a fairly unknown Peru side and will round off their group campaign with the chance to enact revenge on Denmark after their World Cup loss in 2002. This could be a decisive match in determining who finishes top, should they both play according to rankings. 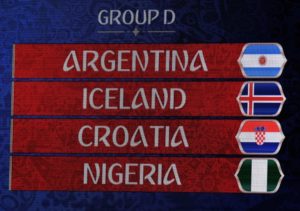 Argentina were finalists in 2014 but have been poor in qualifying, and just about scraped through. They relied on a Lionel Messi hat-trick in the final match to confirm qualification and are looking short of confidence. This will give their three group opponents a boost, as they look to compete in what seems a tight group. Iceland will be making their World Cup debut and, after an impressive Euro 2016, will be looking to make a statement at this tournament as well. They will find it tough going, however, against experienced sides in Croatia and Nigeria, who will be making their 5th and 6th appearances, respectively.

Argentina should recover their form in time to top this group, mainly due to individual brilliance. And Croatia will join them in the last-16 thanks to Modric and co. Nigeria will just miss out in third, whilst Iceland will have a wake-up call after their dreamland adventures in 2016.

Iceland have the massive task of playing Argentina in their first ever World Cup match on the 16th June, whilst Croatia face Nigeria later that same day. Iceland travel further south, to Volgograd, to face Nigeria on the 22nd June, a day after Argentina and Croatia battle it out. Nigeria and Argentina will then compete – for the third World Cup in a row – in the final group game, and Iceland will close out their first group campaign against Croatia. 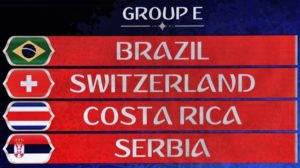 Brazil are the most successful team in history, having won the tournament five times. And they look destined to increase that to six. They have been rampant in qualifying since Tite took over and it will be a tough ask for Switzerland, Costa Rica and Serbia to stop them. The Swiss went through the playoffs to reach this stage but, barring Shaqiri, don’t possess a lot of threat. Serbia and Costa Rica look a lot more dangerous with the likes of Dusan Tadic and Celso Borges.

Brazil will cruise the group, leaving a straight battle between the other three teams for second place. The matches between those three teams will be tight affairs with very few goals scored, but Serbia will progress, leaving Costa Rica in third and Switzerland bottom. 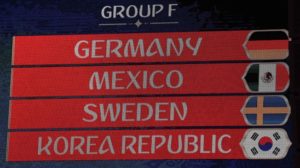 Current holders Germany will be pleased with the outcome of their draw but will also be wary of slipping up due to the possibility of facing Brazil in the next round . The group should provide them with enough competition to get used to the demands of the tournament but not enough to cause too much of an upset. Mexico came through comfortably in qualifying and Sweden proved they are no fools after edging out Italy in their playoff. Whilst South Korea have been struggling in recent years but in Heung Min Son will be dangerous on the counter attack.

Germany will remain unbeaten, finishing top of their group, with Mexico a close second. Sweden may run Mexico close but will be in vain and Korea will struggle at the bottom. 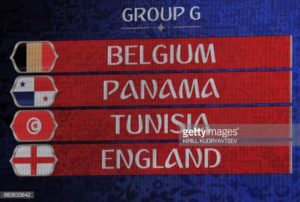 England have been disappointing in recent tournaments and will be looking to progress to the quarter finals for only the second time since 1990. That previous quarter final appearance was in 2006, during England’s “Golden Generation” period. And Belgium are now living through their own “Golden Generation”, with the likes of Eden Hazard and Kevin De Bruyne. They will be seen as a dark horse for the title, proving difficult opposition for anyone. Tunisia have not won a World Cup match since 1978 and Panama have never won – with this being their first appearance.

It will be very difficult to look past anything other than a Belgium and England top two. Tunisia will do their best but lack the quality to cause a real upset and they will finish third, ahead of debutants Panama.

The final meeting in Group G will be full of Premier League stars as Belgium and England battle it out. This will likely be the decisive match in who finishes top of the group- although with England’s recent competitive history they cannot be so complacent. 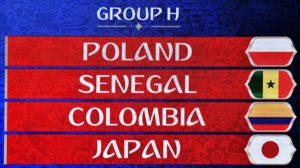 Poland are the highest rank in their group and, in Robert Lewandowski, have a genuine world class performer. He top scored in the European qualification campaign with 16 goals and will be relishing the chance to get some more this summer. Colombia had incredible success in 2014, reaching the quarter finals thanks to some brilliant performances from James Rodriguez. He finished as top scorer in that tournament, with six goals, and will be looking to do the same this time round. Senegal will hope they can recreate their masterclass from 2002 – their only previous appearance- when they beat France in the group stage, whilst Japan will try to improve on their record of only 2 wins from their last 11 World Cup matches.