Manchester City are obliterating everything that comes in their way and, with 18 games gone, they have accrued 52 points from a possible 54. Currently undefeated, they are simply running away with it, and breaking records with ease. But the question on everyone’s mind now is whether they could be considered the best team in the Premier League era? There have been some brilliant teams in the past so here are the teams City will be competing against. 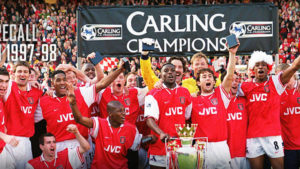 Wenger’s first great team at Arsenal ended United’s dominance of the 1990s by winning the Premier League and FA Cup in 1998. And many believe this team were better than the ‘Invincibles’. They had an incredibly resolute defence and one of the best central midfield partnerships the Premier League has ever seen. Patrick Vieira and Emmanuel Petit complemented each other so well, whilst bullying teams along the way. They claimed 15 wins from 16 Premier League games at the turn of the year and, with an FA Cup thrown in for good measure, will be considered by some as Wenger’s best team.

Gary Neville is one of those that believes this Arsenal team was better than the team in 2003/04. “The side that I regard as their greatest ever [is] not the Invincibles of 2003, but the 1998 double-winning team,” said Neville. “They were the strongest domestic team I have ever played against… by far. They were experienced and strong, both mentally and physically. They were tough. They didn’t have the touch of arrogance that would come in the Henry years when their attitude was ‘you can’t touch us, we’re French and we’re brilliant’.” The Invincibles had a “soft centre” according to the experienced Neville. 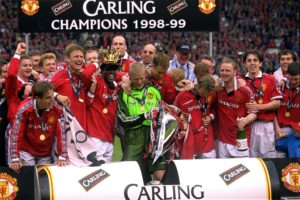 The Treble winners are arguably United’s best team of all time. It included greats such as goalkeeper Peter Schmeichel, the so-called “Class of 92” in David Beckham, Ryan Giggs, Paul Scholes, Gary and Philip Neville and Nicky Butt, as well as the likes of Roy Keane and Eric Cantona. They had such resilience, as well as a whole range of personalities that worked so well together. All United teams under Ferguson have fought until the death, but this team took it to another level. Much like City this season, United in ’99 had the ability to win games when the clock was ticking down to its final seconds. And the most famous example of this was, of course, the two goals scored against Bayern Munich in added time to secure the Champions League.

It remains a truly remarkable feat, and Sir Alex Ferguson paid testament to their spirit for achieving this impossible task. He said, “The most important thing was the spirit of this team. They just never gave in, they don’t know how to. They’ve got that beast inside them and they found it when it mattered. People will never forget this team.” Too right we won’t. 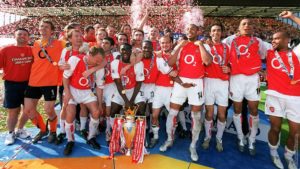 Arsenal’s “Invincibles” of 2004 are the next obvious comparisons. They are the only Premier League side to go a season undefeated but City will have one eye on this record after their impressive start. Arsene Wenger’s side had an incredible balance to their team. And with the likes of Lehman, Campbell, Viera and Henry, had possibly the strongest spine of all time. Add to that the flair and brains of the players around them, and you could say they had it all. But in terms of the number of points and games won, the Blues are currently outperforming them. City have secured 10 more points and scored 22 more goals than their counterparts at the same stage of the campaign and will be relishing the challenge of going undefeated for the season.

That team were voted as the Best Team in the Premier League’s 20 Seasons Awards, back in 2012. And Patrick Viera recalled the keys to success. “We had a commitment, we worked really hard, we had momentum and overall the spirit between the players and in the football club was so positive. It was all about believing in ourselves that we were going to win a game or at least take a point. Our self-belief as a team was fantastic. At the time we didn’t really think we were part of something special because you never know you are going to do it until the end.” 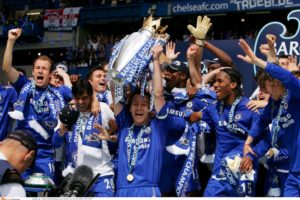 Jose Mourinho‘s Chelsea sides of 2004/05 and 2005/06 rocked the Premier League. They set the record points tally (95) for a Premier League season and were so dominant for those two years. Their season was based almost entirely around a solid defence – conceding just 15 goals and recording 25 clean sheets. Records which still stand to this day. Claude Makelele – synonymous with the defensive midfield role – was the crucial part of Chelsea’s 4-3-3 formation. A formation which swept teams aside, thanks to the counter-attacking brilliance of Arjen Robben and Damien Duff. Not forgetting the integral parts Frank Lampard and Didier Drogba played.

And when Sky Sports asked Terry if that Chelsea team would beat City, he added: ‘Yes, yes. We were never afraid to say: “They’ll have more possession than us,” but we were set, comfortable. The full-backs would always go up the pitch, and [Claude] Makelele would always sit, which was great for us centre-backs. But we had great legs, great power, and we had the big man up front. Didier [Drogba] made such a difference. We had that ball into Didier, and he could hold it up, with the runners off him and [Frank] Lampard would be box-to-box game after game.’ 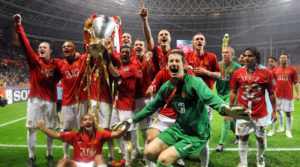 The Manchester United team between 2007-2009 won three consecutive Premier League titles, and a Champions League as well. They were an utterly dominant force and their breathtaking counter-attacking abilities with Ronaldo, Tevez and Rooney going forward tore teams apart. This was Ronaldo’s best season in English football, scoring 42 goals in total, and was the best United team since the treble-winning days. But for a surprise FA Cup quarterfinal defeat at home to Portsmouth that year, United probably would have gone on to win a second treble, recording more history.

And former Manchester United legend Wayne Rooney believes the current City side still have a long way to go to match up to Sir Alex Ferguson’s 2007/08 team that lifted the Premier League and Champions League double. He said: ‘I’m not sure they are quite there. They would have to keep going and do a lot more. I would go with the United team from 2008. There are so many great teams throughout the years in the Premier League. This City team need to win trophies and do it for a longer period to be in that bracket.’