With World Cup qualification now sealed, it is time to look at some of the biggest surprises from the campaign. 211 teams attempted to qualify with only 32 places available. And this year, it seems freak results were handed out far more generously. Some hugely historic teams failed to qualify, with a number of ‘first-timers’ replacing them. There were also a number of world-class players who failed to make the cut, mainly due to the randomness of their birthplace. 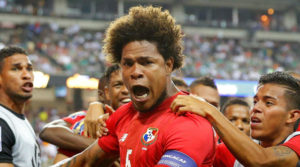 Panama made history by qualifying for the World Cup for the first time. The feat was so impressive that President Juan Carlos Varela announced a national holiday in its honour.

It was not without controversy, however. Panama clinched qualification in the final group game, beating Costa Rica 2-1. But their opening goal, scored by striker Gabriel Torres, should not have counted when his header failed to cross the line.  The linesman gave it anyway and they did not look back. Panama, the 60th ranked team, finished their campaign in the third and final automatic qualification spot, ahead of Honduras on goal difference. This will give them enormous confidence and they will appreciate every moment this summer. 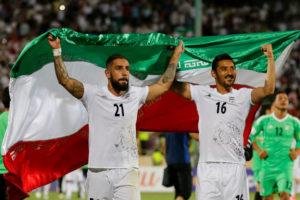 Iran are becoming one of Asia’s best teams again, so qualification may not be as much of a surprise. But considering the off-field issues Carlos Queiroz has had to deal with, it is still mightily impressive. Their political instability off the pitch directly contrasts their resilience on it. Queiroz has got them playing as a unit and, after conceding only 2 goals in 10 matches, will be a difficult team to break down. They topped their group by some distance, finishing seven points ahead of second-place South Korea and will be feeling confident ahead of their trip to Russia. 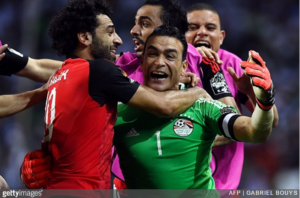 Egyptian fans will be buying Mohammed Salah’s drinks for the rest of his life. Provided these bars are actually outside of Egypt. The Liverpool star almost single-handedly sent Egypt to the World Cup for the first time since 1990. He finished as their top scorer with 5 goals, including two in the final match. There could also be a record set by Egypt’s 44-year-old goalkeeper, Essam El-Hadaray, at this summer’s World Cup. If fit and playing, he can become the oldest player ever to compete at the tournament, which would take some beating. The Egyptian fans celebrated wildly, with thousands gathered in the street cheering and honking their cars. If these celebrations are recreated in Russia, it will be quite an atmosphere.

Why I love football, politics & how it impacts society. Egypt this evening after qualifying to World Cup.pic.twitter.com/8Rv7NjCZPQ 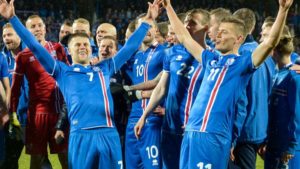 Despite their brilliant run to the quarter finals of Euro 2016 and their impressive qualification campaign, the Iceland story remains one of the most jaw-dropping. They are the smallest nation by some distance to ever qualify for the World Cup and their freezing climate should deter anyone from playing football for 8 months of the year. But the determination of those at the top, to develop a footballing nation, is remarkable. They have created a special atmosphere in the country, building hundreds of ‘football huts’ that enable the sport to be played all year round. This gave them the platform to top their qualifying group, ahead of experienced teams like Croatia, Ukraine and Turkey. They have some of the most passionate supporters, who provided us with some highlights from Euro 2016. There is also the exciting prospect of a regenerated Thunderclap (or something new?) in Russia. What could be better? 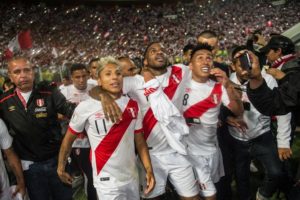 Peru qualified at the expense of Chile. They finished fifth after their 1-1 draw against Columbia in the final fixture, qualifying for the playoffs. They went on to beat New Zealand 2-0 on aggregate to claim a World Cup spot for the first time since 1982. 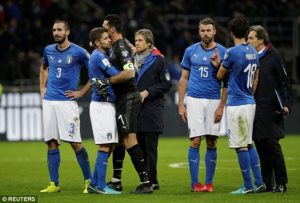 Italy’s failure is nothing short of baffling, and will be the first time they are absent from a World Cup in 60 years. The Italians were unfortunate to be drawn with Spain in their qualification group and it always seemed likely for them to go through via the playoffs. Once they got to the playoffs, however, they looked short on confidence and rarely looked like scoring over the two legs. There was more than enough quality for them to beat Sweden but they stuttered to a 1-0 aggregate defeat. Following on from their loss, a number of high profile players have announced their retirement, including; Gianluigi Buffon, Giorgio Chiellini and Daniele De Rossi. It will take some time to replace these players but Italy will come back stronger. 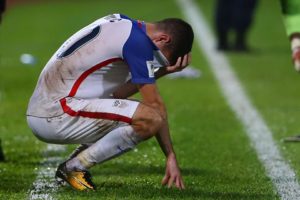 The U.S have been one of the most consistent performers, in terms of World Cup qualification, in recent years. They have qualified for every tournament since 1990, competing in seven successive tournaments. Within these contests, they have only failed to progress past the group stage on three occasions. As such, failing to qualify this time around will be considered a massive blow. They finished fifth in a six-team group, behind Mexico, Costa Rica, Panama and Honduras. Their performances were nothing short of poor and they will already be planning their route back for the 2022 World Cup. 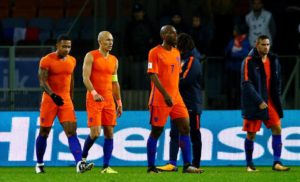 The curious case of dutch football. For so many years Holland have been at the top of international football, reaching the World Cup semi final as recently as 2014 . But their talent pool has declined dramatically, after failing to qualify for successive major tournaments. A large reason for this is their inability to replace the old guard. The likes of Robin Van Persie, Arjen Robben and Wesley Schneider are not what they used to be and as they start to retire, the team could suffer. The Dutch endured a little bit of bad luck after missing out on the playoffs through goal difference. And a big reason for this was their 4-0 defeat to France. They will want to rectify their poor qualification campaigns in the last two years and Euro 2020 will be a must for them. 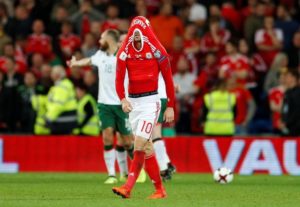 Wale’s rise has been very recent, and yet their failure to qualify for the World Cup still raises some eyebrows. My eyebrows anyway. They were 90 minutes away from reaching the final of Euro 2016 but still succumbed to a third place finish in their qualification group, below Ireland and Serbia. There will be a lot of disappointed fans, who would have expected a lot more, given the players they are blessed with. These include; Arsenal’s Aaron Ramsey, Tottenham’s Ben Davies and Real Madrid’s most expensive signing Gareth Bale. Chris Coleman’s future is still up in the air and the Welsh board will be hoping they can get him to sign a new contract in time for the European qualifiers. This will be vital in order for them to get back on track. 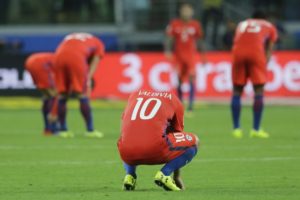 Chile are currently ranked ninth in the Fifa Rankings and have appeared in three of the last five tournaments. The nation also won the previous two Copa Americas and, as such, a World Cup without them will be a strange feeling. With the likes of Alexis Sanchez and Aturo Vidal, the Chileans would have expected far better performances. They had an inconsistent set of results winning eight, drawing two and losing eight of their eighteen matches. This resulted in a sixth place finish, one spot below a playoff position. 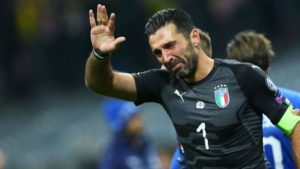 Buffon was prevented from having a fairy-tale end to his Italian career. The 39-year-old, 2006 World Cup winner, confirmed his international retirement after the heartbreaking loss to Sweden at the beginning of the week. He will go down as one of the best goalkeepers of all time and will be a huge miss in the summer. 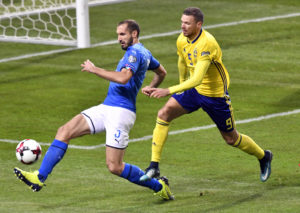 Like compatriot Buffon, Chiellini confirmed his retirement after the loss to Sweden earlier in the week. The 33-year-old, who plays alongside Buffon at Juventus as well, made his Italy debut in 2004. He was not named in the squad for the 2006 World Cup triumph but was named in the squad for every tournament from then on, going on to make 96 Caps. He will always be remembered as one of Luis Suarez’s victims after the Uruguayan bit him at the 2014 World Cup. 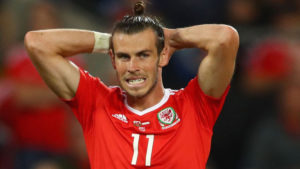 Gareth Bale is still waiting to make his World Cup debut and, due to his injury problems, may only have one last shot at making it. The 28-year-old inspired the nation to the Euro 2016 semi finals, but failed to do the same in their World Cup qualification pursuit after another injury-hit campaign. He missed their final two qualifiers and could only watch from the sideline as they finished third in their group, behind Ireland and Serbia. 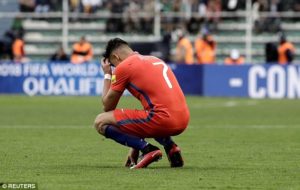 The Arsenal man is not shy of showing his emotions on the pitch. And he would have cut a disconsolate figure on the pitch after their 3-0 loss to Brazil in the final group match. To make matters worse, his Arsenal team mate and Colombia number one, David Ospina, made the howler that gave Peru the point they needed to finish above Chile. Sanchez still managed to score seven goals in qualifying but it was all in vain. 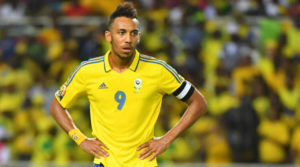 Aubameyang suffers from the biggest contrast of all. The Borrussia Dortmund forward is miles better than any of his international teammates and, as a result, may never play at a World Cup. Aubameyang gets very little service in the team and is unable to show his quality. Gabon have never qualified for the tournament and this does not seem likely to happen in the future. They scored one goal in their final four qualifiers and just the three goals overall.