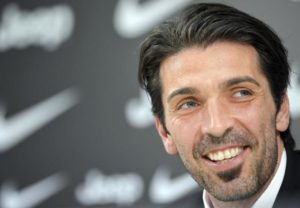 People like Gianluigi Buffon rarely come around. He is as impressive on the pitch as he is off it. His calm and laid-back approach to life outside football directly contrasts his fierce competitiveness, and will to win, once he gets inside the war-zone. Otherwise known as the football pitch. The 39-year-old Juventus shot-stopper has enjoyed a wonderful career, winning almost every trophy possible. But the Italian legend has said he will call time on his glittering career at the end of the 2017/18 season. Unless they win the Champions League!

He will go down as one of the best Goalkeepers that has ever played the game and has, for so long, stood out in what can be considered the most isolated job in football. There are few tougher positions on the pitch than between the sticks, and the fact that he has remained at the top of this sport his entire career is testament to him. And the people around him.

There was a recent FourFourTwo documentary brilliantly depicting the loneliness a goalkeeper may experience during their career. It describes how for large parts of the game, they are cut-off from the rest of the team and are asked to prevent the very thing most people watch the sport for; goals. Standing so near to the away fans for half a match, they also have to suffer all sorts of abuse, some of it being incredibly personal. Very few people put their name forward to be a goalkeeper and yet the minute mistakes are made, thousands, if not millions, of fans believe they can do a better job than the man in question.

It is the most cut-throat position in football. Just ask Liverpool’s Simon Mignolet and Lloris Karius. They have both struggled through their careers at Anfield, regularly being replaced by the other. However, neither of them are terrible goalkeepers. They are both brilliant shot-stoppers, who frequently make goal-saving blocks that help the team win a match. Or prevent a defeat. And yet, they are still seen by most Liverpool fans, and fans in the Premier League, as ‘flops’ at the club. 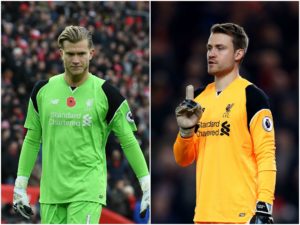 Buffon has had to go through all of this, and yet on the face of it, it seems like it has passed him by with ease. As if it was just a normal job. Like he was just ‘delivering post’ to quote the enigmatic Mario Balotelli.

Mario Balotelli “When I score, I don’t celebrate because I’m only doing my job. When a postman delivers letters, does he celebrate?”

He has performed at the top of the game for over two decades and is consistently regarded as one of the best goalkeepers ever. From a collective standpoint, he has helped Juventus win a staggering ten league titles, and won the World Cup with Italy. Whilst, individually, he was voted Serie A Goalkeeper of the year a record ELEVEN times, along with being in the Uefa Team of the Year an impressive four times. 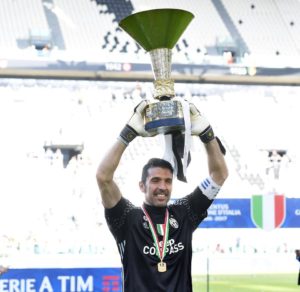 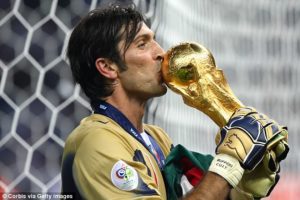 It hasn’t been all plain sailing, however. He has endured some difficult times and shown his vulnerability as well. He has gone through dark patches, as everyone does, but he has done so with grace. And he has bounced back to incredible levels. So well, in fact, that it is easy to forget he had the tough times to begin with.

He signed for Juventus from Parma in 2001 for a record fee of €45 million. Just the fee alone would have been a burden on most people’s shoulders. But not for Buffon. Although, he made a couple of mistakes early on, he settled very quickly and helped Juventus reach the Champions League final, which they unfortunately lost. A theme that would remain during his time at Juventus. 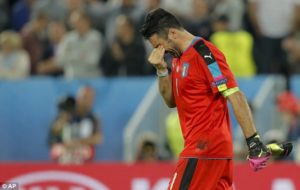 A couple of years later however, he started to suffer from bouts of depression. It was so bad at times that he was afraid to walk on the pitch and compete. Something that previously had come so naturally to him. But he refused to stop playing. He couldn’t take a break because he felt this great responsibility to his teammates and didn’t want to let them down. He demonstrated great loyalty to those around him even though he was suffering personally. This loyalty is something which we see from him throughout his career.

Two years later, in 2006, during the Italian league’s struggle with match-fixing, Juventus were relegated to Serie B (the second division) and had nine points deducted at the beginning of the season. This not only meant they were playing against second division teams for the whole season. It also meant there was a worrying possibility that they could stay there indefinitely. On top of this, they were banned from competing in Europe and faced a mass exodus of star players who felt they needed to play at the top level. But instead of joining the exodus that summer, which saw the likes of Fabio Cannavaro, Zlatan Ibrahimovic and Lilian Thuram make a quick getaway, Buffon decided to stay put. His loyal qualities coming through again.

He put his own personal suffering to one side (for a player of his quality, playing division two football is enormous suffering) and remained loyal to Juventus. A team that had put great faith in him from a young age. He pointed to his upbringing to help explain why he chose to stay at Juventus. “Maybe I had a different upbringing from other players, maybe a different education, especially from my parents in terms of the way I should behave when it came to dealings with others”.

His selfless loyalty and desire to be the best he can be remain a shining example to other professional footballers. He is an inspiration as much for his character as his goalkeeping ability. The fact that he was able to come through such lonely encounters with dignity and style speaks volumes about the man he is, as well as the family that brought him up. And for this reason, we should feel privileged that we got to experience both Buffon the goalkeeper and Buffon the man.