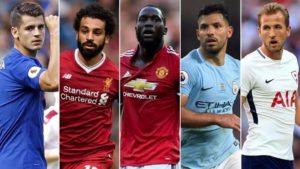 English clubs have made history, becoming the first nation to have five teams in the knockout stage of the competition.

Tottenham and Manchester City had confirmed top spot in game-week 5, whilst Manchester United and Liverpool did so in the final group game. Chelsea were the only English team to finish as runners-up, failing to beat Atletico Madrid in their final game.  And they lost out to Roma on the head-to-head record, after Roma had won once and drawn once against the West-Londoners.

Finishing top of the group usually provides the team with an easier route into the last eight as they are drawn against one that finished second. But this year is different with so many top teams finishing in that position. And there is now a pretty even chance for one of the group winners to get the likes of Bayern Munich, Real Madrid and Juventus in the next round.

The English teams cannot be drawn against each other in the next round and, as a result, Chelsea have been placed at a significant disadvantage. Due to the impressive performances of the Premier League clubs, Chelsea can only be drawn against three teams. Two of these are Barcelona and Paris Saint Germain. Whilst the third team is Turkish club Besiktas. This leaves them vulnerable to an incredibly tough match in the next round. Something which could have been avoided.

Who can the Premier League clubs be drawn against?

When is the Draw?

The Champions League draw will take place at Uefa headquarters in Nyon, Switzerland on Monday, 11 December. The draw is set to start at 11:00 GMT, with the Europa League draw immediately afterwards at 12:00 GMT.