On this day 34 years ago, a remarkable story unfolded that still leaves the footballing world in utter mystery. The Jules Rimet Trophy, awarded to the winner of the World Cup, was stolen by some Brazilian thieves in a simple, but daring, theft. And it was never recovered.

History of the Jules Rimet Trophy

The Jules Rimet trophy trophy was originally called “Victory” but was renamed in 1946 to honour FIFA President Jules Rimet who had initiated the competition in 1929. It was designed by Abel Lafleur and was created in gold with a base in semi-precious stones. The original trophy depicts Nike, the Greek Goddess of Victory, holding some sort of cup/vessel.

The trophy is seeped in history and was first awarded to Uruguay after their triumph over Argentina in the 1930 World Cup. It was was then lifted by the Italians for successive tournaments. And following on from the Second World War, returned to Uruguay in 1950, before West Germany won their first of three titles four years later. But the next 25 years of the trophy’s history was all about Brazil. It represented a combination of Brazilian elation and eventual heartbreak and embarrassment.

In 1930 Fifa agreed that, should any nation win three finals, they would be given the trophy for good. Brazil achieved this in 1970, following their thrashing of Italy in Mexico. And therefore, the trophy was presented to the Brazilian Football Confederation. 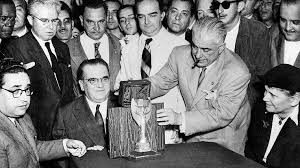 This is where it remained until one night on the 19 December 1983, the trophy was stolen. Two thieves (some say three) tied-up the nightwatchman and forced open the wooden frame of the bulletproof-glassed display box that held the trophy. They swiped the trophy and ran. To this day no-one was ever charged with the robbery and, as such, it remains elusive, despite a countrywide manhunt (and trophy hunt) and a few arrests.

Brazilian idol Pele, sympathised with the criminals, blaming the robbery instead on ‘desperation’ due to the country’s widespread poverty at the time. Others, however, were not so sympathetic and in 1989 one of those arrested suspects – Antonio Carlos Aranha – was found dead having been shot seven times.

What happened to the trophy after the theft?

The most widely believed theory is that the Jules Rimet was melted and sold as bullion. But football writer Simon Kuper has voiced his reservations about this theory. He pointed out that the original trophy wasn’t actually made of solid gold, but of silver coated with gold.

“The story has holes,” Kuper claims. “For a start, the Rimet couldn’t be melted into gold bars because it wasn’t solid gold. Most likely, the German replica wasn’t all gold either. Moreover, the police had no evidence the trophy had been melted down. Indeed, the convicted Argentine gold dealer Juan Carlos Hernandez testified that he didn’t melt it down.”

And thus the mystery goes on. There is still very little evidence and knowledge of what happened to the trophy that night. But one thing is for sure: it wasn’t the only time the trophy had been stolen.

The Jules Rimet World Cup trophy was also stolen while on exhibition in London just before the 1966 finals. On that occasion, however, the trophy was recovered. Pickles the dog came to the rescue seven days after the theft, discovering the trophy wrapped in newspaper outside the front garden of a house in South London. 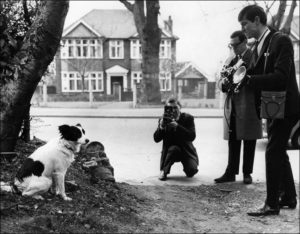 The FA commissioned a replica trophy to be made in time for the tournament and rumours surfaced that the trophy England handed back in 1970 was indeed the replica. They had it checked and confirmed the one returned to the Mexico World Cup was the real one. The ‘replica’ was then sold in an auction in 1997 and purchased by FIFA for a staggering £254,500. FIFA later admitted they did this due to the possibility that the replica could actually be the real one. It wasn’t, and they forked out a quarter of a million on a replica.

The incident has become so comical that a comedy-drama has been created based on these events. “Jules and Dolores” follows the thieves behind the 1983 theft of the legendary Jules Rimet trophy in Rio de Janeiro.