As we enter the month of December, it can only mean one thing; a festive pile-up. For the fans this can be considered a treat but for the players it is six weeks of tiresome work. They journey across the country (albeit on first class travel), competing in the most intense league for 90 minutes with very few days of rest in between. And this year, the fixture generator has thrown up an even tougher period of games than normal.

Last season, Premier League teams had 3 weeks to complete 5 games, whereas this season it has increased to 6 games in the same period of time. And this does not include the League and FA Cup games that have been added into that mix. This format has seen a lot of criticism over the years from Premier League managers. With the likes of Sam Allardyce, Pep Guardiola and Jurgen Klopp all questioning these decisions. And Arsene Wenger believed that last season’s fixture list was the most uneven he had seen in 20 years of the Premier League.

Arsene Wenger believes the festive fixture list is the most “uneven” he has seen in 20 years.

Who has the most congested fixtures?

It doesn’t get any better this season, however, and some teams have been more unfortunate than others. Due to TV rights, plenty of fixtures have been moved around, with a lot of the bigger clubs getting a few days extra rest.

Leicester City will experience the most congested set of fixtures between the 23 December and 1 January, whilst Arsenal will experience the least. Leicester play four matches in the space of 213 hours, with Arsenal enjoying a more leisurely 290 hours to complete their set of matches.

Other big clubs, including Manchester City and Chelsea, enjoy a longer period of rest than their counterparts further down the table. But the likes of Brighton, Burnley and Bournemouth have been given a limited space of time- completing their four fixtures in just over 215 hours.

Here are the televised fixtures in full: 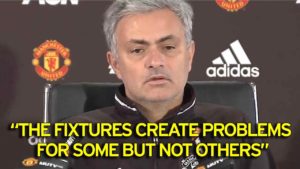