This week has seen on loan James Rodriguez play for Bayern Munich in their 2-1 defeat to his parent club Real Madrid. A club where it has not quite worked out for him after his 80 million Euro move in the summer of 2014. Rodriguez moved to Madrid after being one of the stand out players at the World Cup in Brazil, unfortunately for him, he has not lived up to his price tag. But what went wrong for the Colombian International?

In his Debut campaign at the Bernabeu, James impressed, scoring 17 times in 46 games for Real Madrid. Unfortunately, Real ended that season trophy-less and head coach Carlo Ancelotti was sacked. This is where things began to go wrong for the Colombian international as he, almost immediately, become out of favour under new manager Rafael Benitez. Benitez received plenty of criticism for his treatment of James, yet he still remained on the bench most of the time due to the rise of the Brazilian Casemiro in midfield.

When James was finally picked in the starting XI, it was in an El Classico match at home to main rivals Barcelona. To make matters worse for Rodriguez, Real were thrashed 4-0 in that match leading to Rafael Benitez being sacked.

Real Madrid legend Zinedine Zidane made the jump from being youth team manager to managing the first team. Many fans thought that Zidane coming in would instil James back into the first team, however, this was not the case as Zidane chose to stick with the deadly front 3 of Bale, Benzema and Ronaldo with Casemiro again taking up the other place in the midfield. When it came to the end of the season, James only had 21 starts and never made it off the bench in the Champions League final victory over Atletico. 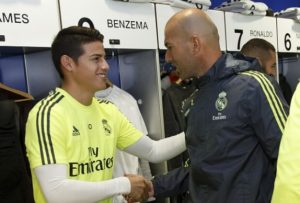 Throughout this time, James remained adamant that Zidane was his idol and that they maintained a great relationship. However, words from Zidane about James remaining in Madrid were getting less and less convincing. The climax ofJames’ time in Madrid was when he was left out of the 2017 Champions League final match day squad against Juventus. Rodriguez could clearly see that he was not in Zidane’s plans for the big games and seeked a move away.

James moved to Bayern Munich last summer on a 2 – year loan deal from Madrid but once again struggled early on in the season due to Bayern’s problems with Carlo Ancelotti. However, when Jupp Heynckes took over, he has helped James Rodriguez to get back to the level that he once was at. The Bayern Manager has said that the fans love him and “enjoy” watching the Colombian play. James has said he is “very happy at Bayern” and that he “feels very happy in Munich.”

Are you backing James? Check out our Colombia world cup odds. 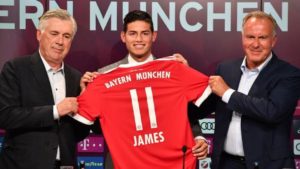 Zidane said on Tuesday ahead of Madrid’s Champions League quarter-final first leg against Bayern at the Allianz Arena that he did not want James to leave. “He wanted to play more and I understand that. I have never had problems with James. He needed to play more and that’s the only thing.” Zidane also reassured James that he has nothing against him and he views him as a “great player”

🎙️ Zidane (on James Rodríguez): "He'll be up for it because he's a footballer and he'll want to do well."

"You're wrong if you think that I've got something against him. He's a good player." pic.twitter.com/vOp5MzPkWk