We are almost halfway through the season, and the impossible is slowly starting to become possible once more. After Arsene Wenger’s Invincibles of 2003/04 we never thought we would see that again in the Premier League. But Pep Guardiola’s Manchester City might just replicate Arsenal’s achievements and become even better Invincibles – the stats point in that direction at least.

After their victory over Manchester United on the weekend, City broke the Premier League record for the most consecutive victories in a single season- with 14. And should they beat Swansea City tonight, they could break the longest winning run in the Premier League ever. They are currently equal with Arsenal, who won 14 successive matches between February and August 2002 – over the course of two seasons. But achieving it in a single season will be a far greater feat. 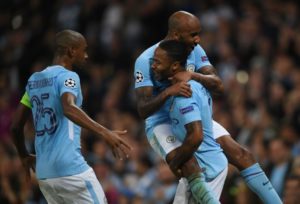 Their blistering start to the season has seen them head and shoulders above their rivals- and analysing almost any metric will back this up. They have won the most matches, scored the most goals, conceded the fewest, and dominated possession in every match, whilst completing the most passes. They have blown away almost all of their competitors, averaging 3 goals a game. And they are surpassing all sorts of records after 16 games of a Premier League season.

The Blues have dropped just two points in the league so far, which is eight fewer than Arsenal did in their invincible campaign at the same point in the season. With City currently on 46 points, they are projected to become the first Premier League team to break the 100 points in a season tally (109), record the largest winning margin (26) and score the most goals (114). This is by no means a guarantee as they would need to continue at their incredible rate. But just the fact that we are taking about this so early in the season is testament to their performances this season.

There is still a long way to go and a lot of tough fixtures to play, including a difficult match-up with last season’s runners up Spurs on the weekend. But if they are able to come out of the Christmas/New Year period unscathed, then they have a great chance of achieving this.

Manchester City’s odds of going the season unbeaten have been slashed after their win at Old Trafford on the weekend. Bet 365 held their odds at 10/1 before the weekend but have now reduced them to 6/1 following the impressive victory. And they have also reduced the odds of City winning the league by a record margin to 4/1. After the fairy-tale of Leicester City a couple of seasons ago, the bookies are now far more cautious with their odds.