This week showed us all that the Premier League Managerial Merry-Go-Round is still very much turning. Both Alan Pardew and Sam Allardyce were confirmed with new jobs, at West Brom and Everton, respectively, presenting an amusing but worrying pattern in the league.

Out with the Old, In with the…Old 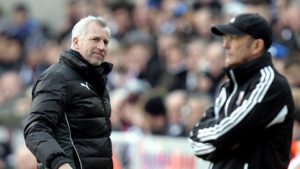 Within the last twelve years Tony Pulis, Alan Pardew, Sam Allardyce, Roy Hodgson and David Moyes have all been recycling the same jobs within the league. At least two of this quintet have managed West Brom, West Ham, Newcastle, Everton or Sunderland at some point in the last decade. And in some cases, three of them.

There is also a familiar feel within their reign as manager. They take over with the team in a relegation fight, guide them to safety, start to suffer again the next season and usually get sacked within a year or two. This happened with Tony Pulis recently, after he was shown the exit by West Brom, but he will no doubt be back in management soon. Maybe even at Newcastle, if the cycle continues.

But, joking a side, this is a pretty worrying trend for the Premier League. The fact that we see the same old faces linked to every job, other than top-6 clubs, shows a lack of imagination. The club boards are too cautious and play it ‘safe’ too often. They see a manager who has had plenty of premier league experience, and grab them with both hands. But that is all they have. They don’t possess a great record at their clubs and provide almost no progression due to their ‘experience’.

The average age of these five managers is 60. As a result, they will not be looking to improve the club’s facilities or promote the youth. They will be focusing on their 25 man squad and finding ways to win, match by match. There is no long term goal. Only short term success; survival. The clubs are more concerned with keeping hold of the money the Premier League disposes of than setting up a long term strategy. And so they hire managers who ‘know the league’.

But this prevents young British coaches from gaining any experience due to a club’s avoidance of hiring those with different qualities. And so the viscous cycle continues. 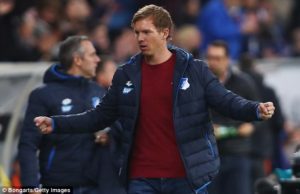 This can all be prevented with a change of attitude, though. And the clubs should look to the Bundesliga for inspiration. The German clubs look for quality and a long term strategy. With Schalke and Hoffenheim prime examples. They hired youthful managers in their thirties, with a combined age of 62, who are now flying at their respective clubs. Hoffenheim hired Julian Nagelsmann in 2016 when they were in deep relegation troubles, and a year later they are third in the league. They put faith in a manager with no senior level experience but he had a vision. And an abundance of quality.

This is what needs to change for Premier League clubs. But it needs to change quick because the longer it goes on, the worse it will become for the league. For the viewers, the fans and the clubs. English football will become a laughing stock. And it could eventually come to a stage where there are six clubs fighting for Europe and fourteen ‘fighting’ for survival.