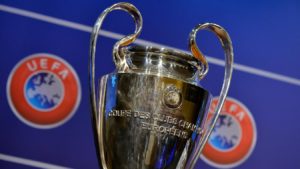 We are now two-thirds of the way through the Champions League group stage, with everyone playing four matches each. Teams have already started to qualify for the knockout rounds and I thought it was an appropriate time to sit back and reflect on the campaign so far.

As a Premier League fan, not just a Spurs fan, I enjoy watching the English teams do well (apart from Arsenal!). It gives me a great sense of pride, and reassurance, that we are competing in one of the best leagues in the world. But for the past 5 years, that assurance has been lacking. Since Chelsea won the Champions League in 2011/12, which was incredibly undeserved, only one English team has reached the semi-final; Manchester City. And in the five seasons since that triumph, the Premier League has only had four quarter-finalists. If you compare that to 15 Spanish quarter-finalists and 9 German quarter-finalists in the same period of time, it is a dreadful record for an alleged ‘top’ league.

The Spanish and German teams have been wiping the floor with the best in our division and Arsenal have been the butt of most of the jokes. Even the Bayern Munich twitter handle couldn’t help get involved after they thrashed Arsenal 10-2 on aggregate last season.

What time is it? Yep, it’s ten to! ? #UCL #ARSFCB pic.twitter.com/T2lDkvivkS

Arsenal also lost 5-1 against Barcelona the season before. It has been embarrassing to say the least, and it didn’t look like getting much better when the draw was made in August.

My beloved Tottenham Hotspur were drawn in the so called ‘group of death’ along with European heavyweights Borussia Dortmund and Real Madrid. Whilst Manchester City and Chelsea also faced tricky opponents. City had to contend with away days at Napoli and Shaktar Donetsk, whereas Chelsea faced experienced pros in Roma and Atletico Madrid. Twitter trolls had already sent Spurs packing into the Europa League before they had even kicked a ball!

But what was about to happen, for all the English teams, was scarcely believable. No one in their wildest dreams could have predicted how well they would have fared. Of the twenty matches involving Premier League clubs so far, 15 have been won and only one lost. That equates to an impressive 75%-win percentage. The Spanish and German clubs are at a lowly 44%.

The two Manchester clubs have 100% records, Spurs are still unbeaten and Liverpool hit a magnificent seven goals against Maribor, recording the biggest away win in Champions League history. These four teams are sitting top of their respective groups and looking very comfortable. Manchester City and Spurs have qualified for the last-16 after their impressive wins over Napoli and Real Madrid, respectively. Manchester United have all but confirmed their qualification as group winners, needing just a point from their final two matches. Whilst Liverpool are also top, although still with a bit more work to do. And don’t forget Chelsea. They sit second in their group even after letting the rest of the Premier League down with a nightmare 3-0 loss at Roma this week. Even so, they are still four points ahead of Atletico, after the Spanish team’s woeful start to the Champions League, and look certain to qualify.

It is all looking rosy for the Premier League clubs. But how has there been such a dramatic turnaround for the English teams after a dismal few seasons in the Champions League?

The answer is a bit of luck, a little patience and a whole lot of  ‘Supermanagers’. 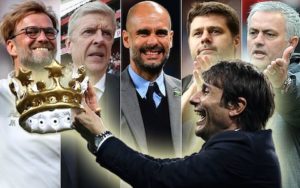 La Liga may boast the best footballers in the world, but the Premier League can boast the ‘Supermanagers’. They came one by one, taking the Premier League by storm. And now it seems they are taking the Champions League by storm as well. The likes of Mourinho, Guardiola and Klopp will be seen as some of the best of all time. Whilst Pochettino and Conte are not far behind. And, together, they have turned the English clubs into powerhouses once more.

Their importance in a team game, like football, is huge. They are the ones that motivate the players, set out a game plan and build a team who are better than the sum of its parts. They have taken some criticism, especially from the media, but have the character to take it on the chin. 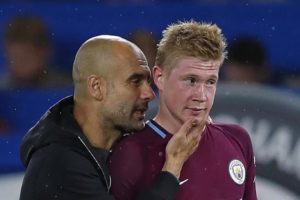 All five managers are in, at least, their second season in charge. This longevity gives them the time to pass on their wisdom and expertise. It allows the character of each manager to rub off onto the players. The players, in turn, are now performing and acting like their manager’s clones. On and off the pitch.

Mourinho’s dogged  personality is rubbing off in Manchester United’s refusal to get beaten defensively. Guardiola’s passion of the beautiful game can be seen in City’s breathtaking attack that scare opponents of the pitch. Whilst, Pochettino and Klopp’s steely determination is demonstrated in such an intense press that, at times, it feels like every single one of their players will end up in the opponent’s goal. And finally, Conte’s excitable manner, for good and for bad, is exposed in Chelsea’s erratic performances this season.

Whether you love them or loathe them, each manager brings their own personality to the game. Their record in Europe this season is remarkable and they have turned the Premier League’s fortunes around. Each of them have improved their respective clubs drastically, both defensively (apart from Klopp) and offensively. They are a refreshing addition to English football and will be sorely missed when they are gone. So lets enjoy them while they are still around.