Once you become a professional footballer, the hard work does not stop. In fact, it probably gets even harder. And as a Premier League player it is vital they continue training off the pitch in order to see the positive results on it. Here are some snippets of how certain players improve on their strength, speed and avoid stiff muscles. Courtesy of FourFourTwo.

Players need to have a solid base of strength throughout their body, giving them a platform to build speed and power from. This includes, weightlifting, core strength and suspension training.

Romelu Lukaku, currently at Manchester United, is one of the strongest players in the league. And he told FourFourTwo the kind of exercises he goes through to build this up. “I’m a striker known for my power and pace and in the gym the core and TRX stuff helps me, especially with holding my man off using my arms.
“Most of the time when I run at full pace and the defender tries to push me off I don’t have to do anything because I’m that strong.”
Tom Cleverly, another Premier League player, has been looking to improve his strength so he can run the game more effectively from the middle of the pitch. He splits his strength sessions into two – upper body and lower body. With each lasting no more than 30 minutes. He does lots of different exercises with a minutes rest in between each one.
“It’s a circuit so I’ll do one set of a chest exercise like bench press, for example, then move to a different body part after a minute’s rest.” He also advises “to have at least two or three days between your lower body routine and your next match. If you do it right, the lower body routine should really take it out of your legs – obviously not a good thing just before a match.” 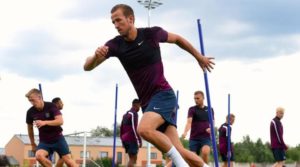 Players like Harry Kane and Frank Lampard would never be the fastest, no matter how much they train. But it is still possible to improve on your speed, and be faster on your feet. They both trained hard at it and made significant improvements.

Lampard said, “When I was younger my dad told me I wasn’t the quickest and that I had to work hard on it, so ever since then I have done a lot of speed work. For example, I do five 10-yard sprints from a standing start to work on my speed off the mark. Lampard then explained how important it was to be quick in the mind. “I think if you’re one step ahead mentally you can have the edge. Try to read the game: watch your opponents and team-mates so you can anticipate their next move. When you haven’t got the ball, look around you – know what you’re going to do with it before it arrives.”

Kane also realised how important it was to be able to out-sprint your opponent from a striker’s perspective. Especially when running on to a through ball. And he has trained rigorously at bettering that.
“Being able to out-pace your opponents gives you a huge advantage in football. I did a lot of work in the gym to improve my speed. Strengthening your glutes and hamstrings will give you the power you need to accelerate explosively, but you also need to ensure that your running technique is right. I worked with a sports scientist specificially on arm movement and the mechanics of sprinting. It’s really helped me, especially when I’m chasing a through ball.” 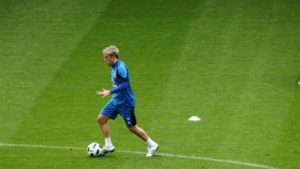 It is even more difficult to continue this training towards the end of your career. Once you are into your thirties, everything becomes a little bit more difficult. Stiffness is a lot more common and it takes longer to recover after matches than it did previously.

Phil Neville experienced this towards the end of his time with Everton, and he found Yoga and Pilates hugely beneficial during this period. It was the first thing he would do when he woke up and again once he got to the training ground. “I get up and perform five sun salutations [yoga] for around three minutes. The movements warm up every part of my body. Sometimes I wake up in the morning and feel stiff, and these essential exercises send energy to my muscles.”

“The first thing I do when I’m at the training ground is a 30-minute yoga session with a couple of the other players. Yoga has 26 poses, and our teacher will concentrate on five or six tailored for the movements of football. I pay particular attention to my hips and my groin.”