This week, Romelu Lukaku has sent social Media into meltdown with a tweet regarding the idea of a Premier League all-star game with the north taking on the south. It has caused lots of discussion all over the internet and many people have had their opinions on it.

This is not the first time that this idea has been brought into football. In 1997, there was a Europe vs the Rest of the World game in the run up to the France ’98 World Cup Draw. The teams both were full of the very best the footballing game has ever seen. For Europe, they boasted the likes of Alessandro Costacurta, Fernando Hierro, Paul Ince, Zinedine Zidane, Patrick Kluivert and Alen Boksic. But with Gabriel Batistuta and Ronaldo up-front, there was only going to one winner – the Rest of the World ran out 5-2 winners that day.

This Europe vs Rest of World all star game is the only recognised game of this type that the footballing world has seen, however this type of game takes place in many other sports: 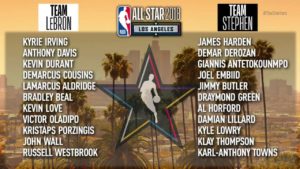 The NBA has been hosting all-star basketball games since 1951 with the teams being made up of the best players from the NBA’s 2 conferences – the East and the West.

However, this year for the first time they have changed the format with 2 captains being selected who took it in turns to select their teams. The two captains are LeBron James and Steph Curry.

This is the NFL’s version of an all-star game is called and it normally takes place the weekend before the Super Bowl somewhere nice and sunny – this year it was in Orlando, Florida, where it rained the whole day!

It’s a part-exhibition match, part game show but getting selected to go is a pretty big deal.

Most of the time the teams are picked based on the NFL’s two conferences – the NFC and AFC.

Players, managers and coaches all get to vote on who goes – which means you have to be rated by everyone in order to be selected. You’ll often hear players referred to as a three, four or five-time Pro Bowler – which means they have been selected multiple times and are amongst the highest regarded in the sport.

Rather than a one-off game, the Indian Premier League have created a whole cricket tournament out of the “all-star” idea.

The Twenty20 cricket competition offers teams the chance to buy the world’s best players, with the players being auctioned off to the highest bidder before the start of the season.

Another interesting fact about the IPL, is that there a system where the players have the power to set their base price to make sure they’re not sold too cheaply.

The 11th edition of the world's most popular and competitive T20 tournament will be played at nine venues across 51 days.

We’ve now seen how other sports do it, now would this work in the PL?

Build your own lineups here !