When Liverpool signed Mohammed Salah for just 35 million Pounds last summer, not many people would have expected him to have made anywhere near the impact in his first season on Merseyside. He is not only the current Premier League top scorer with 28 league goals, but he is also the top scorer across the top 5 European Leagues – surpassing the likes of Messi, Ronaldo and Cavani.

Mohamed Salah is the top scorer across Europe's top five leagues – even leaving Lionel Messi in his dust! pic.twitter.com/6tLWjiTtiv

He has also recently led his beloved Egypt to the World Cup with a last-minute penalty and was named African Player of the Year. However, things have not always been easy for the 25-year-old, and below we take a look at how his short career has led him to be the success that he is today.

His early days in Egypt

He was born in June 1992 in the Village of Nagrig in the Western Province of Egypt. At the age of 11, Salah joined Egyptian club El Mokawloon. He managed to gain a promotion to the club’s first team after scoring 35 goals in one season at under 17 level. He spent two seasons with the Egyptian club’s first team scoring 12 goals in 39 games. Salah’s coach at that time, Mohamed Radwan, reportedly told Salah to leave Egypt and go to a European club so his talents could be shown to the world.

At this time, Basel from Switzerland has been interested in the winger. They organised a match against the Egypt under 23 side just so that they could see Salah play. It was after this, that Salah decided to leave Egypt to chase his dreams and play in Europe. Although, the Egyptian has never forgotten his roots and Egypt has always had a big place in his heart. He has always remained humble and grounded, as well as donating large sums of money to his home town for different charitable projects such as building a nursery.

Almost immediately after the under 23 game where Basel scouts kept a close eye on Salah, he signed for the Swiss division 1 side. At first, he was used more as an impact substitute however slowly but surely, he nailed down a fixed place in the first team. He won the Swiss Super League in 2013 and scored 10 goals in 47 appearances.

The winger scored in both ties against Chelsea that season in the Champions league. As a result of this, he caught the eye of Jose Mourinho and resultedly signed for the Blues in January 2013. 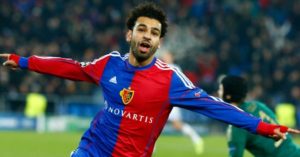 Although there was a lot of hype surrounding Salah’s move to Chelsea, things did not go exactly as planned for the young Egyptian at Stamford Bridge. His time in London almost looked over before it had begun as Salah was informed that he would have to go back to Egypt for Military Service. After much debate, he was excused from his duties and was able to stay at Chelsea.

It was not long before Salah fell out of favour under Mourinho, with the Portuguese manager pulling him off at half time in one particular game. As well as this, Mourinho was unimpressed with Salah on many occasions as he “barked” at him during games before being told to “return as a professional footballer next season”. This left Salah’s career in Jeopardy, with the young Egyptian feeling hopeless and extremely embarrassed. 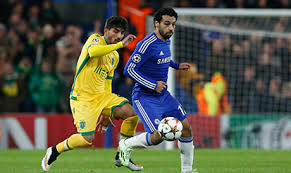 Chelsea then decided to send him to Italy, on a loan deal to Fiorentina. Surely looking back, Mourinho must be ruing his decision!

When he arrived in Florence, Salah took the number 74 shirt to commemorate the 74 people that lost their lives in the Port Said Stadium Riot in Egypt.

During his time at Fiorentina, Salah scored memorable goals in high profile games against Inter Milan Juventus. He scored 6 goals in 16 games which made everyone at Fiorentina want to keep the Egyptian winger. Salah decided that he did want to stay in Italy rather than move back to the Premier League, however, he decided to move south to Roma.

Salah joined Roma in August 2015 on a 1 year loan deal with the option to make the deal permanent. He finished that season with 15 goals in all competions, making him the leading scorer in Rome. As a result of this, they decided to make his move a permanent one in August 2016.

During his time in Rome, Francesco Totti, a legend at the club, labelled Salah as “one of the best players around”. It was praise like this that attracted the attention of the biggest clubs around Europe, and in August 2017, the Egyptian winger signed for Liverpool for a fee of 36.9 Million pounds. This price was arguably a bargain, leaving many Roma supporters questioning the sale of such a great, young talent.

Take a bow for Mo Salah, the Egyptian King ? pic.twitter.com/EMS9XvkEjh

He is on course to reach 35+ goals in the league this season and therefore has to be in contention for PFA player of the year. As well as this, might he be able to lead his beloved Egypt to World Cup Glory this summer?