The 1930 FIFA World Cup was the inaugural FIFA World Cup, taking place in Uruguay from 13 July to 30 July 1930. A large reason FIFA selected Uruguay as host nation was due to their upcoming centennial celebration of its first constitution. Additionally, they were considered to be one of the best teams in the world at the time, having just won successive Olympic golds, and Jules Rimet, president of FIFA at the time, liked the idea of the host being the strongest team.

FIFA, the international governing body of football, was formed in 1904. Prior to the World Cup, they generally organised the Olympic football tournaments, with their first gig coming in 1908. And due to the success of the tournament, FIFA expanded their membership to non-European countries as well. The first of these countries to join were South Africa, Argentina and Canada. With Chile and the United States joining shortly after.

But the tournaments at the Olympic games were only open to amateurs and FIFA disagreed with the IOC  over this, so football was dropped from the Games for the 1932 edition. As a result, Jules Rimet took it upon himself to organise the first World Cup tournament. A tournament where both professionals and amateurs are included.

There was limited time to get teams invovled, and as such, the 1930 World Cup became the first and only tournament that was played without qualification. All 41 members of FIFA were invited to participate in the competition and given until February 28 to either accept or decline. Countries in the Americas were keen to participate, whilst those in Europe were far less so – mainly due to the long and costly trip.

No European entries were received before the February deadline but thanks to some persuasion from Rimet, four teams agreed to travel.  And after some teething troubles and withdrawals, 13 teams were eventually confirmed. All the European nations – Belgium, Romania, Yugoslavia and France – traveled to South America on the same ship, picking Brazil up on the way. In total, seven teams from South America, four from Europe and two from North America participated. 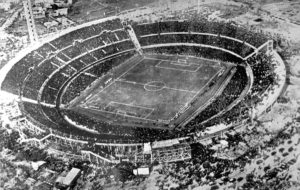 All matches were played in the Uruguayan capital, Montevideo, due to a lack of facilities around the country. And the majority of these matches were played at the Estadio Centenario, which was built specifically for the tournament. The stadium hosted 10 of the 18 matches, including both semi-finals and the final and had a capacity of 90,000. At the time, it had the largest capacity of any stadium around the world, apart from those on the British Isles. The other stadiums used were Estadio Pocitos, and Estadio Parque Central.

The teams were drawn into four separate groups – three groups of three and one group of four. A round-robin format was played, with two points awarded for a win and one point for a draw. And the four group winners progressed to the knockout semi-final stage, with extra-time being played in these matches if needed. Uruguay, Argentina, Brazil, and the United States were seeded, and were kept apart in the draw. 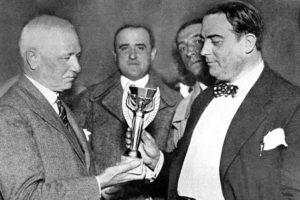 The first two matches of the tournament started at the same time on July 13 1930 with France beating Mexico 4-1 and the United States beating Belgium 3-0. Frenchman Lucien Laurent scored the first goal of the tournament, whilst the first World Cup hat-trick was scored a few days later by American Bert Patenaude in their 3–0 win against Paraguay.