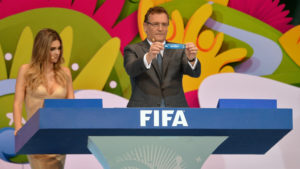 The pots have been confirmed, signalling another step closer to the World Cup. On December 1st we will find out who England, and the rest of the world, will face in Russia. This is always the most difficult period for teams. There is so much anticipation and so many possible scenarios. It must feel like there is more uncertainty in the three weeks leading up to it than there ever was in qualifying.

The draw works as follows:

When/Where will the draw take place?

The draw for the group stage of the 2018 World Cup will take place on Friday, December 1 at the State Kremlin Palace inside the Moscow Kremlin.

Events are expected to kick off around 18:00 local time, which is 15:00 GMT in the UK, and 10:00 ET in the US. The World Cup draw will be available to watch live on television and is also likely to be streamed on FIFA.com.

Gary Linekar and Fifa confirmed recently that he will present the draw along with along with Russian sports journalist Maria Komandnaya.

Delighted and honoured to be hosting the draw for the greatest competition in sport. https://t.co/eZcJCmMvcC 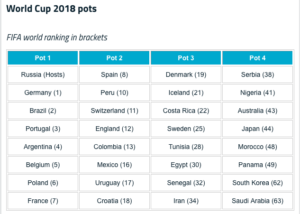 England have been placed in pot 2, along with the likes of Spain and Colombia. This means that England will avoid them in the group stage but there are still some huge teams waiting in pot 1. All the tournament favourites have been placed in that pot, including; Germany, Brazil and France. Pot 3 is made up of the Christian Eriksen inspired Denmark, Italian conquerors Sweden and Iceland, the smallest nation ever to appear. Whilst pot 4 consists of new boys Panama, Tim Cahill’s Australia and 2002 semi finalists South Korea.

As the cliche goes, ‘there are never any easy games in football’ but there are some that are easier than others. So there will be a few teams England would prefer to face and some they would rather not, as they play their way into the tournament. 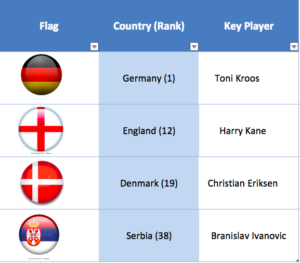 From pot 1, they would prefer to avoid the likes of Germany, Brazil, France and Argentina, whilst Belgium would also be a tricky tie. Germany, specifically, are the holders of this tournament and would be a disaster draw. From pot 3, Denmark will be filled with confidence after their emphatic victory over the Republic of Ireland in the playoffs. And in Christian Eriksen they have a real danger man. Whereas Serbia are a surprise team in pot 4. They will prove a real handful for any team, and with the likes of Dušan Tadić, Nemanja Matić and Aleksandar Kolarov, have a lot of Premier League experience. 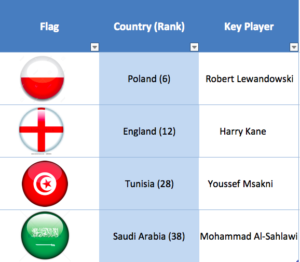 Russia, Portugal and Poland will be the preferred options from pot 1. But as hosts, Russia could be a different beast with the crowd behind them and Portugal have a knack of performing against England in the big tournaments. That leaves Poland as the most favoured opponent, despite their threat going forward. From pot 3, there are a number of  potential banana skins but Tunisia should be the least of them. And completing the group should be Saudi Arabia, who are the lowest ranked team in the competition this year.