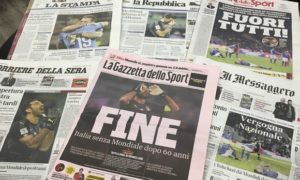 It’s not difficult to understand how big a shock Italy failing to qualify for the 2018 World Cup is. Just by typing the simple words ‘Italy’ and ‘football’ on Google, you are bombarded with exaggerated headlines that equate it to apocalypses and more. The 1-0 play-off loss to Sweden ended their hopes of qualifying for the Russian World Cup. The first time they failed to do so since 1958. And Italian headline writers have not sugarcoated their disappointment and embarrassment, referring to the loss as a ‘Death in San Siro’.

Italy have had a turbulent few years, crashing out at the group stage of the last two World Cups. But there was little to suggest what was to follow. The result will go down as one of the biggest shocks in footballing history and could result in some serious repercussions for the nation as a whole.

In Italy, Football is much more than just a sport. It is a way of life. And in the days after this defeat, Bill Shankly’s motto will never ring truer. “Some people believe football is a matter of life and death. I can assure you it is much, much more important than that.” There will be national devastation and disbelief across the board, with the Italian’s economy potentially taking a big hit.

In the past, notable events in football, both good and bad, have impacted the economy for the following weeks and months. For example, after the Italian’s World Cup triumph in 2006, their GDP grew by 1%, or €16bn, according to farming group Coldiretti.

However, this time around it looks like it could take a turn for the worst. The former chairman of the National Federation has estimated that Italy’s failure could cost the country around 1 billion euros. There are so many aspects to this, including the missed advertising sales and television rights related to an event like this, but that is only the start.

Franco Carraro, a senator of former Prime Minister Silvio Berlusconi’s Forza Italia party, believes the failed qualification could have a longer and costlier implication than many people realise. He said “There is much more to it, including the missed sales for travel operators organizing holiday packages to Russia, let alone the turnaround of betting companies and of bars and restaurants across the country during the matches.”

In addition, the team won’t play any competitive matches until the European qualifications start, just under a year away. “That implies that other friendly matches will attract less interest and money at all levels, including sponsorship and television rights.”

End of an Era 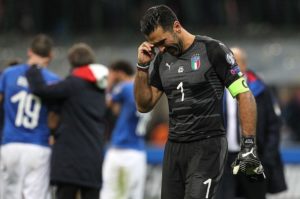 On top of the financial implications of such a crisis, however, there are also the footballing implications. The Italians had an ageing core in their team and it looks like the end of an era is now looming. Gianluigi Buffon was the first to announce his retirement recently and confirmed afterwards, through a vale of tears, that this defeat would be his final appearance for Italy. And, although Italy have the perfect replacement in AC Milan’s Gianluigi Donnarumma, there will be number of other important players joining Buffon in retirement that could leave gaping holes.

Andrea Barzagli, 36, Giorgio Chiellini, 33, and Daniele De Rossi, 34, are some of the names floating around. They have all been struggling for fitness in recent times and may see retirement as an opportunity to speed up the younger generation’s progress. Their dedication to the team has been phenomenal in the 10+ years they have been at the top. But it was time for a change. And this change needs to happen quick

The coach is always the first person to be questioned after such a failure. And the board answered this with a major sacking. Giampiero Ventura, 68, was hired, in the summer of 2016, on the back of a successful time with Torino. He helped them to Serie A promotion in his first season in charge, before guiding them to the last 16 of the Europa League in 2015. But he always had a low-key CV, and was yet to manage a top side, let alone win a first tier trophy. This inexperience at the highest level may have played a large part in italy’s failure, with the pressure proving too much. 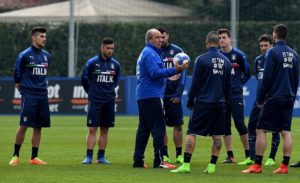 During the qualification campaign, he also frequently referred to the ‘golden generation’ Italy have coming through. There was a real buzz about the youngsters and his strength, supposedly, lay in developing them. But very few of them were called upon in times of need and six of their starting eleven against Sweden were over the age of 30.

Ventura clearly failed to guide the youth effectively, one of the main reasons he was hired, and the Italian board felt they were left with no choice but to sack him. They are now left with a situation where the next move is vital and the importance of their next choice of manager cannot be understated. Depending in which direction the team goes will depend on who they hire. The most important aspect, though, is replacing the recently retired seamlessly. Otherwise they could follow in the Dutch footsteps, who have just failed to qualify for their second successive major tournament.

It is not all doom and gloom for Italy, however. They have a number of players that can lead their country to a more successful period for years to come. There is also a lot of exciting young talent in the current squad. And the board will hope the next manager can develop them over the next few years.

In AC Milan’s Gianluigi Donnarumma, they have the perfect replacement for Buffon. The 18-year-old recently became the youngest Italian goalkeeper to start, and has been playing first team football since 2015. He could reach 100 appearances for AC Milan by the end of the season which would be a remarkable achievement.

?? ? | History made. Gianluigi #DONNARUMMA is now the youngest goalkeeper to have started for #Italy! #VivoAzzurro #Azzurri #NEDITA pic.twitter.com/GsWskSVtwu

Italy also have some brilliant midfielders, who are starting to make a name for themselves. The standout players include; Napoli’s Lorenzo Insigne, recent Juventus signing Federico Bernardeschi and PSG’s Marco Verratti. Bernardeschi, 23, had a productive season at Fiorentina, contributing to 18 goals in 32 appearances (13 goals and 5 assists). This prompted Juventus to splash out €40 million on him over the summer. Whilst Insigne, 26, has been electric for the last few seasons at Napoli. Since the start of the 2015/16 season he has scored 33 league goals, forming a third of the dynamic trio Napoli possess.

The Italians have made a knack of succeeding when no one expects them to. Some of their most impressive feats have been winning the 2006 World Cup in the midst of the match fixing scandal and reaching the Euro 2016 quarter finals with a depleted squad. If they are able to pick themselves up after the apparent ‘apocalypse’, however, it will surely be one of their most impressive achievements.