At Dickie Bet, we work closely with some of the leading bookmakers in the UK to offer you the best world cup odds on the market. To make the most of your bet, you can use free bets so that you have a little to play around with.

The free bets usually work by giving you a one-off bonus for just signing up to a new betting account, or perhaps you have to bet £10 to get back £10 or potentially more. There are also interesting bets such as money back if a certain team or player scores. Whatever your fancy, Dickie Bet has you covered.

The outright winner odds refer to who is going to be the overall winner of the world cup in Russia 2018. This is the most popular bet that people make. Currently the favourites are Brazil and Germany at 9/2, followed by France and Spain at 6/1.

However, the odds are live and will change during the competition and this is where it gets interesting. You never know when a team is going to have an amazing start or a very slow one and this is reflected in the odds.

After all, there have been many surprises over the years, including Turkey finishing 3rd and South Korea finishing 4rd in 2002 and Portugal winning Euro 2016 at 20/1.

Part of the skill of a good bet is being able to strike at the right time. Do you find an underdog early on or do you wait a find a better bet later on? 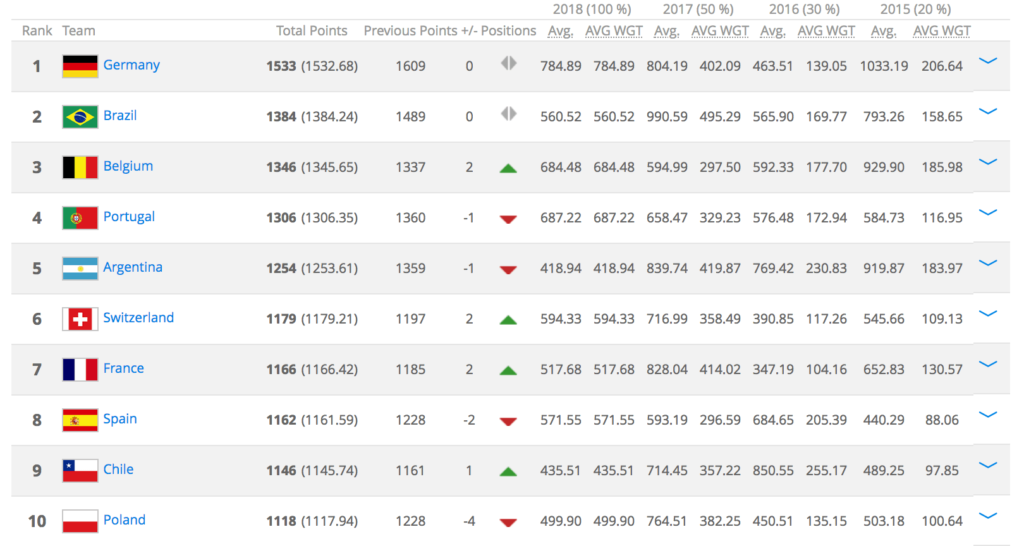 Another favourite to be the world cup outright winner is Germany who won the competition in Brazil in 2014. Their impressive squad have mastered the tika-takka football and have reached the semi-final stage for the last 8 competitions. Squad players to look out for include Marco Reus, Mario Gotze and Manchester City’s league-winner, Leroy Sane. The Deutche-dynamo is managed by returning manager Joachim Low who is in his 12th year as the German coach and has the experience to emulate the glory of 2014.

Odds To Win World Cup in Russia 2018 – Are European Teams The Ones To Watch?

If we look at the last 4 world cups below, we see that the European teams tend to dominate the top 4 positions, with 11 out of 16 top positions belonging to European nations – and Germany featuring consistently.

Despite the Netherlands and Italy not featuring in this year’s world cup in Russia, the European sides are still heavily favourited including a French team with a huge amount of talent and a young Belgium team that is coming into its prime.

There is also the case of teams playing in their home nation or continent which should give them an advantage, however, judging on the results above, this is not necessarily the case. But interestingly, in the year that the competition was held in Germany in 2006, all 4 finalists were European teams.

For us at Dickiet Bet, trying to find the dark horse of the competition is sometimes the most exciting and interesting, especially if you can nail a bargain of 50/1 or 20/1. Sure, there is probably not going to be another Leicester City in our lifetime at 5000/1 unless you want to bet on Tunisia or Saudi Arabia, however, we give you some our top outsider world cup odds below:

The Belgium Red Devils (Rode Duivels) are taking new control under Roberto Martinez and assistant manager, Thierry Henry. The Belgium boys are ranked 3rd in the FIFA world cup rankings and have always been a team with a lot of promise but have failed to deliver on the grand stage, getting knocked out by finalists Argentina in World Cup Brazil 2014 at the quarter final stage and a surprising Wales team in the quarter-finals at Euro 2016.

However, the side have been tremendously strong, including a top finish in their qualifying group which involved an 8-0 drubbing of Gibraltar and 8-1 demolition of Estonia.

Portugal are rarely seen as a huge threat in international competitions. Largely because they are a one man team of Real Madrid’s Cristiano Ronaldo. However, Euro 2016 showed that they had more depth in their squad as The Quinas won the competition beating France in the final, despite their main man Ronaldo going off injured early on.

Other additions to their team include Manchester City’s Bernado Silva, Monaco’s Joao Moutinho and Besiktas Ricardo Quaresma. See full team here. Given that Portugal’s qualifying group consists of Spain, Iran and Morocco, the team should be a strong contender to finish in the top 2 and progress to the last 32 without any issues. When it gets to this stage in the competition, well, anything can happen when you have CR7!

The best world cup odds for Russia are currently at 40/1 and betting on the home nation is not a crazy idea. This is especially given the passionate Russia fans who have quite a presence and Russia’s group of Uruguay, Saudia Arabia and Egypt mean that a top 2 qualifying position is very realistic.

The team finished 3rd in 2008 and has always been a very strong defensive side that will be hard to break down on the day. The home advantage is huge for the host nation and may be the difference between getting through the next round.

Whilst a real underdog at 200/1, the world cup odds for Egypt are a huge punt but not crazy considering that they have Liverpool’s Mo Salah who scored 37 goals in the Premier League this season at an average of 1 per game. He has helped Liverpool enormously in reaching the final of the Champions League and with the magician at work, it is not crazy to think what he could with his national team of Egypt.

Egypt’s qualifying group include Russia, Uruguay and Saudi Arabi and finishing in the top 2 is very achievable. He will look to fellow Premier League player El Neny from Arsenal for support in making it a world cup to remember.

Another huge dark horse for the competition, the vikings of Iceland have developed a reputation as one of the toughest teams to play, after knocking out England in the Euro 2016 last 16.

Made up of experienced players such as Gylfi Sigurdsson and Burnley’s Gudmundsson, the team have the heart and passion to be another surprise nation in the world cup competition. Their qualifying group includes Argentina, Nigeria and Croatia – so whilst it is not the easiest, a top 2 position is certainly on the cards. Be sure to look out for the notorious ‘thunder clap’ from their fans.

Dickie Bet is committed to offering you the best quality, real-time world cup odds during the competition this summer. Be sure to keep checking for updated odds and free bets to make the most of your bets this year!