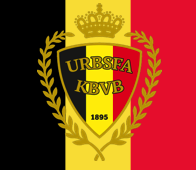 Belgium are the ultimate dark horse to win the world cup in Russia 2018. With Belgium world cup odds at around 20/1 from Betfair and 16/1 from Betfred, it could be one of the best football gambling offers around. The team boasts the quality of goal-scoring machine Romelu Lukaku, previous PFA player of the year Eden Hazard and other class players including Christian Benteke, Thibaut Courtois, Mousa Dembele, Dries Mertens, Kevin De Bruyne, Axel Witsel, Marouane Fellaini, Jan Vertonghen and Toby Alderweireld.

To make the most of betting on Belgium, Dickie Bet providers offer so you can pick up a free bet such as spending £10 to get £30 back. With a total bet of £40 under your belt, Belgium taking home the glory in Russia this summer, could give you a return of around £800 (based on 20/1 from Betfair). Other free bets available include a free £10 for no deposit or deposit £10 and get £10 back.

Our Belgium world cup odds change in real-time, so however the tournament is progressing, you can always get the most updated and best odds for Belgium. Dickie Bet have partnered with some of the leading betting companies in the country to give you the best stakes around.

As we write this at Dickie Bet, Belgium are currently ranked 5th in FIFA’s overall ranking, making them already one of the favourites to win the world cup outright. They have maintained a top 5 position since the last world cup in Brazil. The positioning in based on the run of results and consistencies in friendlies, competitions and qualifiers. Our beloved England sit at 15th on the world rankings (see below):

This strong position for the Red Devils has been supplemented by their flawless performance in the Group H world cup qualifiers, going unbeaten in 7 games, including wins over Estonia, Greece and Bosnia and a 9-0 drubbing of Gibraltar.

Bet on Belgium To Win The World Cup 2018 in Russia

Belgium are a real connoisseur team who have come leaps and bounds in international football over the last few years. With over half of their squad playing in the English Premier League, they have always gathered a lot of interest from English fans and have almost become everyone’s second favourite team.

Failing to qualify for the World Cups 2006, 2010 and Euros 2004, 2008 and 2012, the national squad benefitted from a huge investment in grass roots football, which created a golden age of young talent coming through the ranks – and with Belgium world cup odds at 16/1 and 12/1, it is a real steal.

Whilst the likes of Eden Hazard, Romelu Lukaku and Kevin De Bruyne have always been promising, their performances at the World Cup 2014 and Euro 2016 both ended in getting knocked out of the quarter finals. World Cup 2014 ended with a 1-0 blow against Argentina who went on to the finals and Euro 2016 ended short following a 3-1 defeat to Gareth Bale and Wales.

However, the team are now older, wiser and more experienced and ready to take on the Russia World Cup 2018. With the average age of the squad now 26, there is a level of maturely required to perform at the top level and make an impact against the likes of Germany and Argentina. Lionel Messi only really did he best work on the global stage at his 3rd World Cup and now the Belgium boys can emulate this too.

Beware: If the team get off to a flying start, the Belgium world cup odds from Dickie Bet will change from 16/1 to around 8/1 or 6/1 so one has to be quick off the mark.

Who is The Manager of The Belgium World Cup Team?

The Belgium manager is Roberto Martinez. The Belgium team, known as the Red Devils or Rode Duivels, have been rejuvenated by the introduction of manager Martinez, formerly or Wigan Athletic and Everton. Probably not everyone’s first choice, given that he has never managed a ‘big’ squad and had to replace Belgian football legend Marc Wilmots, probably the most decorated Belgium player of all time. But Martinez is well respected, particularly delivering surprising and wonder results with a lacklustre Wigan Athletic squad, which included beating Manchester City in the FA Cup Final. 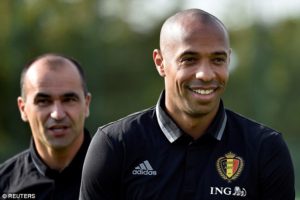 But a real secret weapon has been the appointment of Thierry Henry to be the assistant manager. The former World Cup winner with France has achieved everything you can possibly achieve as a player and brings some va va voom to the table. Being a native French speaker, he can relate to the French-speaking players and provide some attacking expertise to a Belgium team that is loaded with firepower.

Belgium have one of the most brightest and interesting squads in International football, making a strong case for Belgium to win the world cup 2018. 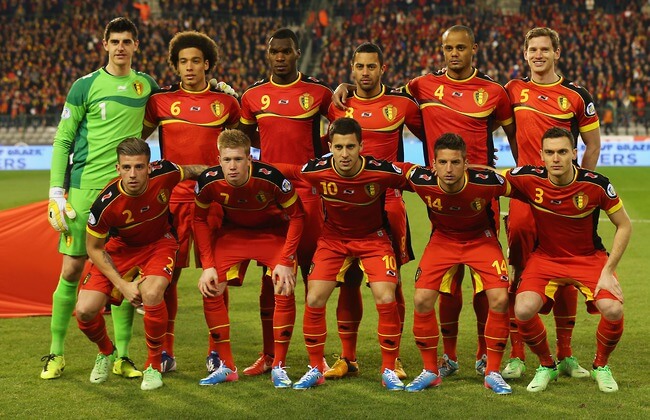 Goalkeepers: Starting with the goalkeepers, they have the incredible talent of Chelsea’s Thibaut Courtois who has demonstrated that he is one of the best stoppers in the world. He is the first choice keeper at 25 years of age and in the event of any injury, there is Liverpool’s Simon Mignolet who offers an experienced and trusted back-up at 29 years of age. Combined they have 70 caps for the national football team and are a solid pair.

Defenders: Usually championed by their captain-marvel Vincent Kompany, known as Vince The Prince to their fans, the experienced centre-half has been battling with injury for years playing with Manchester City. Whilst he could make an appearance, fans and gamblers will be pleased to know that they still have one of the best centre-back duos in the world.

The pairing of Tottenham Hotspur’s Jan Vertonghen and Toby Alderweireld are the ultimate defensive pair for Spurs, conceding the least goals together in the entire Premier League during the 2016/17 season, with only 26 goals. Whilst either player can sometimes to put as a full back, other strong defenders include young Jordan Lukaku, the brother or Romelu, former Arsenal player Thomas Vermaelen, Celtic’s Dedryck Boyata and PSG’s Thomas Meunier. The talent provides height, strength and the ability to score goals too.

Midfielders: A team with a lot of options in the middle of the park. There are several defensive-midfielders who also like to chip in on goals, including Tottenham’s Mousa Dembele, Manchester City’s Kevin De Bruyne, China’s Axel Witsel and Manchester United Marouane Fellaini. Attacking-wise, you have the gifted Eden Hazard to play on the left wing who loves to cut in with his right, Burnley’s Steven Defour who clearly has an eye for goal and Napoli’s Dries Mertens, another quick winner who likes to put them away.

Strikers: All eyes will be on Romelu Lukaku who has demonstrated time and time again that he is a goal scoring machine and is on track to win the Premier League’s golden boot award. He is likely to play as a lone striker for Belgium or potentially next to Crystal Palace’s Christian Benteke or Chelsea’s Michy Batshuayi. Other exciting forward include former Liverpool player Divock Origi who wowed spectators at the World Cup in Brazil two years ago (now with Wolfsburg) and Athletico Madrid’s Yannick Carrasco who beautifully snogged his girlfriend in celebration of scoring during the Champions League final last year. It is clear that this squad will not be short of any goals, especially with Hazard working the wing.

Other fringe players: Fans will be hoping to see the progression of Thorgan Hazard, the younger brother of Eden, who at 24 has slowly worked his way up the ranks. He was previously named as the Player of the Year for the Jupiler league but has failed to secure a position with a top European club, settling for Borussia Mönchengladbach.

People will also be wondering about whether Everton’s Kevin Mirallas will make the cut. A clearly gifted attacking player but rarely selected on a consistent basis. At the last World Cup, everyone was talking about the young and charming Adnan Januzaj but he is another one who has failed to live up to his big name and expectations 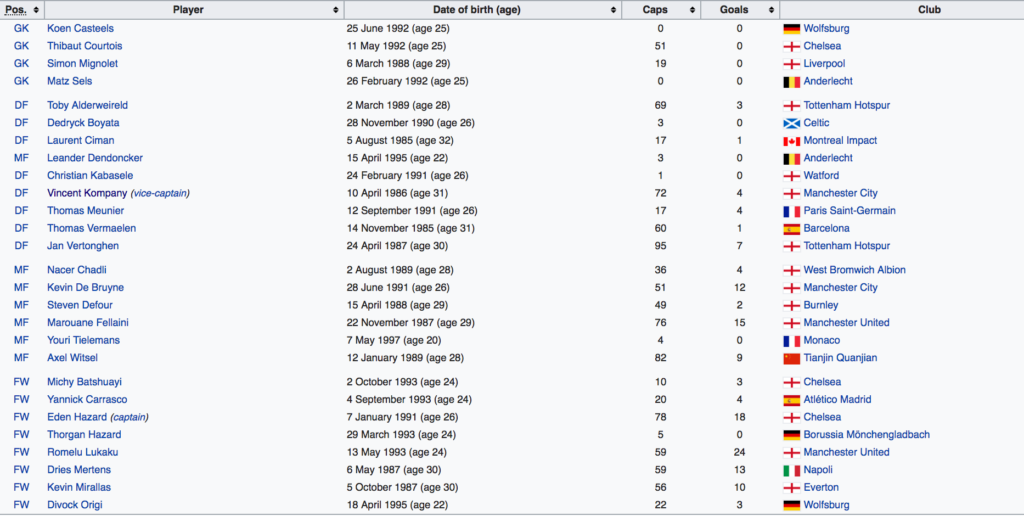 About The Belgium National Football Team

The national team is run by the Royal Belgian Football Association, known as KBVB. Since they failed to qualify for any major tournaments between 2002 and 2014, the governing body spent millions in developing young talent and are now reaping the rewards. But fans had lost faith in the team and there was always a division between the French and Flemish speaking players.

To overcome this, they hired a professional marketing agency to help re-brand the team to the Red Devils or Rode Duivels. The slogan or motto of ‘Tous Ensemble’ meaning ‘All together’ created unity between the different languages and cultures in Belgium. As a result, the Belgians became one of the most exciting and decorated teams to follow. The growth of the team was demonstrated by their increase in sponsorship from unknown Burrda to powerhouse Adidas. At the last World Cup, getting hold of a Belgium jersey outside of the country was impossible, but with Adidas and the distribution that comes it, the team are able to market themselves successfully across the globe.

As part of their marketing efforts, there were a string of competitions for young people to draw pictures of their favourite players, rallies and even an match day which broke the record for most number of female spectators at a game. The video below shows the passion and desire of the Belgium players and their fans and this makes them a strong contender to win the World Cup in Russia 2017.