scraped through qualifying in the South American group. They finished in the fourth and final automatic qualification spot thanks to a 1-1 draw with Peru. The national team had failed to qualify for a World Cup in 16 years prior to Brazil 2014 but have now qualified for successive tournaments for only the second time. The 2014 tournament in Brazil became their most successful one as they lost to the hosts in the quarter finals. And since then they have improved significantly, going to Russia with enormous confidence, despite their poor qualification campaign. After the usual suspects, Colombia’s chances are rated quite highly. 888 calculated their odds at 50/1, leaving them as eleventh favourite.

DickieBet’s odds will be updated constantly during the tournament, giving you the best options at all times. Our free bets page provide you with a variety of offers that can’t be refused. 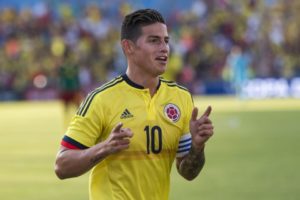 La Tricolor set the World Cup alight in 2014 thanks to some brilliant performances, most notably from star man James Rodriguez. But he is not the only familiar name. They also possess a multitude of European-based players, including; Arsenal’s David Ospina, Tottenham’s Davinson Sanchez and experienced Monaco star Radamel Falcao. They are all familiar with the biggest stage and will be relishing the opportunity to play against the best at international level. As 2014 showed us, Colombia can beat most teams on their day and will be a difficult match for anyone.

However, Colombia had a tough time in qualification. They struggled for form against the bigger teams, losing four of the six matches against those that finished above them; Brazil, Uruguay and Argentina. They only kept seven clean sheets in the 18 matches played, conceding 19 goals along the way. And, towards the end of their final qualifying match with Peru, Colombia, and Falcao in particular, were caught up in a potential match fixing scandal. Knowing that a draw would be good enough for both teams, Falcao was found whispering to the opposition players. Following these conversations, there seemed to be a far slower pace to the game, which alerted the South American media, and a draw was played out.

Falcao convincing Peru players to settle for a draw that would qualify both for the WC!

Is this match fixing? pic.twitter.com/XNhdvqMReK

After the match, Falcao said “Obviously we were aware of what was going on in the other games. We were playing with knowledge of the other results and, in that moment, [we wanted] to make that known.” It is an unfortunate way to end the campaign and this should be looked at more carefully. 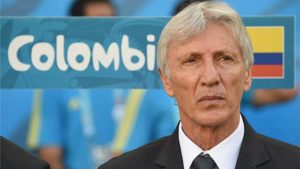 José Pékerman has reinvigorated the Colombian team in the six years he has been in charge. The 68-year-old Argentine was appointed Leonel Álvarez’s successor in January 2012 and has taken the side from strength to strength. He helped them qualify for the World Cup in 2014 for the first time in four attempts, and excited everyone with the type of football on display.

Pékerman spent a period of time playing in Colombia, thus understanding the culture and brand of football they expect. He also managed a wonderfully entertaining Argentina side to the quarter-finals of the 2006 World Cup, losing to Germany on penalties. How else? He, therefore, possesses the necessary quality and experience to provide Colombia with a great platform for success in Russia.He prefers to play a more attacking game and, with the likes of James Rodrigues and Radamel Falcao, it suits the team. They have blistering pace going forward and Pekerman’s tactics are perfectly for this.

However, this match up did not always look likely. After his resignation from the Argentinian national team, following the 2006 World Cup, he took up a couple of jobs in Mexico. But they were both short-lasting, barely surviving a season each. At this point, in 2009, he was in his 60s and struggling to find any jobs. There were rumours he was contemplating retirement but Colombia came calling just in time, in 2012. Neither parties have looked back since and, despite some bumps along the way, Pékerman’s fatherly figure has done wonders for the confidence of the players.