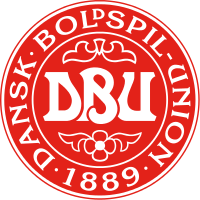 Denmark will be participating in their fifth World Cup this summer after qualifying via the playoffs. They have only recently started competing on the international stage after making their tournament debut in 1986. But their progress has been impressive. Within these appearances, they only failed to advance past the group stage on one occasion, in 2010. And they reached the quarter finals in 1998, losing 3-2 to eventual finalists Brazil. This, coupled with a decent European Championships pedigree, have put Denmark on the map as a difficult European proposition. In addition to this, they are currently 12th in the Fifa world rankings and will go to Russia with huge confidence.

DickieBet will be the best place to keep up with Denmark’s exploits. There will be regularly updated odds and potential opportunities to take advantage of some free bets.

The Danes are heavily reliant on the abilities of Christian Eriksen, whom the team is based around. And rightly so after his performances in qualifying. The Spurs magician scored eight goals in ten group matches to set up a tie with the Republic of Ireland. He then went on to win the playoff match on his own by scoring a magnificent hat-trick in the second leg to give his team a 5-1 aggregate victory. But the team also possess a number of other well known players. These include; Premier League champion Kasper Schmeichel, Chelsea youngster Andreas Christensen and former Arsenal man Nicklas Bendtner. The team have a great togetherness and should progress past the groups but anything more than that will be a tough ask.

Denmark produced some brilliant performances throughout qualifying, scoring for fun at times. Notable scores were their 4-0 and 4-1 victories over Poland and Armenia, respectively. But their best result came in the match away in Ireland. After a 0-0 draw in the first leg, Denmark needed to get a result in the second. And they did that emphatically thanks to a Christian Eriksen inspired performance.They scored 25 goals from 12 games across two rounds of qualifying, whilst only conceding 9 in the process. 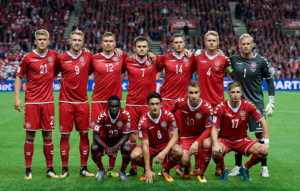 The Danes hold two Premier League quality goalkeepers in Leicester City’s Kasper Schmeichel and Huddersfield Town’s Jonas Lössl. Schmeichel, 31, only made his debut in 2013 but has since played 31 times for his country. And he was vital in Leicester’s surprise Premier League triumph, appearing in every minute of their campaign. Lössl, at 6 ft 5 in, is colossal of a player. He has spent most of his career in Denmark at FC Midtjylland, but has finally got a loan move to the Premier League. He has started every match for Huddersfield so far, keeping 5 clean sheets in 14 matches.

Captain Simon Kjær is the leader in the team. The Sevilla centre-back played every minute of the qualification campaign, helping the team keep five clean sheets. He has had several partners at the back, including; Borussia Mönchengladbach’s Jannik Vestergaard, Chelsea’s Andreas Christensen and Brentford’s Andreas Bjelland. At full-back, Copenhagen’s  Peter Ankersen and Real Betis’s Riza Durmisi are the first choice but due to injuries there has been a lot of shuffling around. Brentford’s Henrik Dalsgaard and Udinese’s Jens Stryger Larsen have helped fill in the gaps in those positions. Whilst Christensen has also helped out at times, most recently in the playoff tie with Ireland.

Copenhagen’s William Kvist, vice captain of the team, has been capped 77 times. The veteran is a rock in midfield, normally playing defensive midfield alongside Werder Bremen’s Thomas Delaney. The pair started together in 10 of their 12 matches, providing a great platform for the forward players to push on from. The team normally played a three in behind the striker with the likes of Yussuf Poulsen, Pione Sisto and Viktor Fischer supporting Christian Eriksen with creativity.

There was some competition for the lone striker role up top. The more experienced Nicklas Bendtner, who now plays for Norwegian club Rosenborg, had for so long been the main forward. But in recent years, Feyenoord’s Nicolai Jørgensen has been playing more. Bendtner went over two years without scoring for his country until he netted the fifth goal in their 5-1 triumph over Ireland last month. Whilst Jørgensen chipped in with two goals. 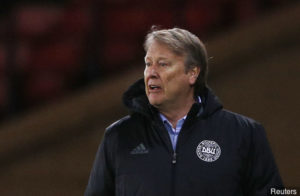 In December 2015, Åge Hareide was announced as the new manager of Denmark after Morten Olsen stepped down following his failure to qualify for Euro 2016. And since then, he has won 10 of his 19 matches, helping Denmark qualify for their second World Cup in three attempts.

Hareide spent a large portion of his managerial career in Scandinavia, managing in his native Norway, Sweden and Denmark. And he remains the only manager to have won the league in all three Scandinavian countries, holding a good record in club management.

But it was in international management where there was doubt. He managed Norway for four years, between 2004 and 2008, failing to qualify for any international tournaments in that time. The Norwegian stepped down in December 2008 citing a lack of motivation as the reason for his decision. He suggested the FA appoint someone who could inject new life into the team following a dismal qualification campaign.

Following on from this stressful period, he took a break to dabble in a bit of Premier League commentary before continuing his managerial career with four Swedish clubs over the next few years. Three of these posts lasted less than a year as he struggled for longevity. He announced his ‘retirement’ in 2012 but was brought out of it by the prospect of managing Swedish club Malmö FF. He had instant success, winning the league and qualifying for the group stage of the 2014/15 Champions League in his first season.

This alerted the Danish FA who confirmed his appointment a few months later.