England are regularly seen as contenders in the big tournaments but so often are underwhelming.  They have fallen at the quarter final stage or earlier at every tournament played since 1996. As such, they currently sit at around eighth favourite to win the trophy outright. England World Cup odds are approximately 16/1 and are considered a good outside bet.

England’s Group G should be very straightforward starting against Tunisia, Panama and then a slightly more challenging game against Belgium. Should they finish in the top 2, they are likely to play either Colombia or Poland in group H in the last 16 – so going to the quarter finals is looking very positive. From this point, anything can happen with the magic of the World Cup.

England outright winner odds are currently at 16/1 to be the winner of the tournament in Russia 2018.

Teams will always have a chance of winning tournaments when they have outstanding individuals in their rank. This is definitely the case with England in Harry Kane, who has been on the rise for three years and, in terms of goals, is now getting close to the numbers of Ronaldo and Messi. With other prime goalscorers such as Marcus Rashford and Jamie Vardy, Jesse Lingard and Raheem Sterling – the Three Lions should not be short of goals.

Gareth Southgate has frequently questioned the ability of his squad, doubting the quantity of “big players” they possess. But once again England have qualified for a tournament with minimal fuss and will look to emulate the class of 1966. There is definite improvement in the squad compared with the 2014 World Cup. But whether that will be enough to win it is another question.

England remained unbeaten during their qualification campaign, winning eight and drawing two. However, they looked wholly unconvincing in a large majority of those matches. They scraped past victories against Slovakia and Lithuania, and were very fortunate to come away with a point against Slovenia. They did just enough against the smaller teams but have so often struggled when the pressure is amplified or the quality of opposition improve. This was the case in their friendly defeat against France, who played the majority of the second half with 10 men. France still managed to walk away with a dominant 3-2 victory. As a result, there will be a lot for Gareth Southgate to work on, despite their unbeaten competitive run. 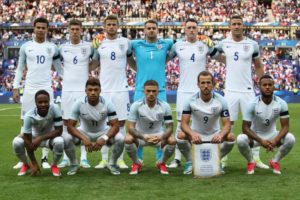 There has rarely been a time when England’s best keepers have all been fit at once but that is finally the case. As a result, places in goal are becoming more competitive. West Ham’s Joe Hart has been the number one since 2010 but after disappointing errors against both Wales and Iceland in Euro 2016, along with a permanent transfer to a team outside of the ‘Big Four’, it seems his position is up for grabs. Stoke’s Jack Butland may be next in line and, after starting the premier league season in fine form, will be a more than suitable replacement. Everton’s summer signing Jordan Pickford has also played well in what is a struggling team and will be looking to get the number one jersey. Whilst Burnley’s Tom Heaton and Fraser Forster, of Southampton, will also believe in their chances of making it to Russia.

Full-back appears to be England’s strongest position, in terms of quality in depth.  Manchester City’s Kyle Walker and Tottenham’s Danny Rose were phenomenal together in Tottenham’s title challenge last season until Rose’s unfortunate injury. As a result, they will be confident of starting together again at the World Cup, should they be fit. With Kieren Trippier, Nethanial Clyne (who is currently injured) and Ryan Bertrand presenting quality back-up. Fabien Delph has also had an impressive start to his career at left-back for Manchester City in recent and may sneak a call-up.

In the centre of defence, there is an obvious lack of quality and pace. Chelsea’s ageing captain Gary Cahill has been prone to a few mistakes and Manchester United’s Chris Smalling has failed to live up to any potential he supposedly had. Smalling’s Manchester United teammate Phil Jones, on the other hand, has looked very influential in a defence that has yet to concede a league goal at home. He will be certain of being in the starting eleven. And Manchester City’s John Stones has looked more composed in the middle for the Premier League leaders. Leicester City’s Harry Maguire and Everton’s Michael Keane will be outside bets for the squad.

Once again, England are struggling in the middle of the pitch. This time it is in midfield. There is a distinct lack of creativity from any of the central midfielders and the partnership of Jordan Henderson and Eric Dier has failed to light anything up. People are so worried about this partnership that there have been murmurs of a Jack Wilshere recall. A player who has barely featured since April 2017. However, the rise of Tottenham’s Harry Winks will give everyone a boost. But the World Cup may come too soon for him to play a significant role.

The big news for England in terms of their forwards is the retirement of Wayne Rooney. Rooney has been a great servant for England over the years and although he promised so much in his early England days, was unable to perform at his best in the big tournaments for one reason or another. The retirement, therefore, presents a good opportunity for the younger players to show the world what they are capable of. Raheem Sterling, along with Marcus Rashford, have started the premier league campaign on fire and could be big players for England if they take that form to the World Cup. 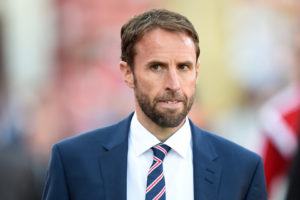 Gareth Southgate succeeded Sam Allardyce in November 2016, after the latter’s embarrassingly short stint in charge. Much like Spain’s current manager Julen Lopetegui, the 47-year-old has very limited experience at the top. He has only managed one club team, Middlesbrough, and spent the last three years with the England u21 team. Even within these experiences, he has had minimal success. At Middlesbrough, he oversaw just the 45 wins from 151 matches. Whilst his u21 side went out in the group stages of Euro 2015. His win percentage going into the job was worse than any of the previous managers in the last twenty years, and his experience was a fraction of theirs. These are not encouraging signs of success. 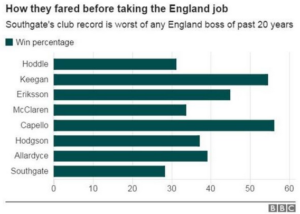 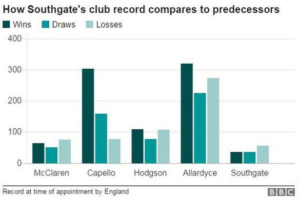 Yet there is still hope. He improved his England youngsters enough to help them win the Toulon tournament in May 2016, which may have been the catalyst for his senior appointment. Additionally, he is youthful enough in his adaptability and has recently suggested he will commit to the more popular ‘back-three’ formation. This will please premier league fans who have seen the majority of their club teams improve under this formation. He also has the respect and support from both the FA and the players, which remains the most important factor. And it seems like everyone is playing for him. For now. The real test will be when the ‘big boys’ come to town.