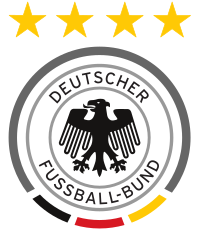 are blessed with a number brilliant players and have been ruthless at recent tournaments, winning the World Cup in 2014. They have an impressive history at the World Cup, winning the trophy four times as well as finishing second a further four times. Deservedly, they are considered as joint favourites along with Brazil, with Germany outright winner odds at around 9/2 and 5/1 to win the tournament.

DickieBet is home of sports betting, providing up-to-date odds for the world cup and all competitions. To make the most of your wager, you can look at our free bets, which include welcome bonuses and exclusive offers with some of our bookmakers.

Germany’s outright winner odds are currently at 5/1 since they are one of the favourites to win the competition. Remarkably, the German Nationalelf (national eleven) have made the last 8 semi-finals of all major competitions across the world cups and euro competitions. The country is very focused on international football, including the consistency of the same manager for the last 12 years and use of the match ball in their domestic league.

The Bundesliga had one of the lowest percentages (49.2%) of foreign players in their league, giving their home-grown players more exposure and experience at the top level. This experience has done wonders for their national team at all age groups and they are starting to see the rewards after a summer to remember in 2017. Their senior team won the confederations cup and their u21 team won the European title; a large reason for this has been their players enjoying regular first team football in highly competitive games. 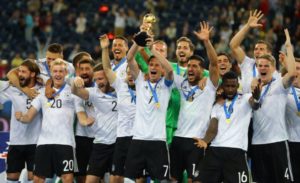 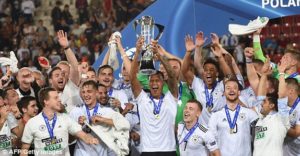 The Germans are meticulous in their preparations for big tournaments and this year will be no different. There is an admirable consistency across the coaching for all the age groups of the national team. The players are all trained to fit in with the same 4-2-3-1 system so when youngsters are called up, they are able to slip in seamlessly. This gives them an impressively short turnaround when attempting to replace the old guard with a younger replacement, enhancing their chance of winning the biggest tournaments.

Germany cruised through their qualifying group with a 100% record conceding just four goals along the way. Additionally, they won the Confederations Cup in the summer with a team made predominantly out of players from their u21 squad thus showcasing their strength in depth. Their squad will be full of confidence going into the World Cup and they have some tasty matches coming up against England and Brazil to test them. 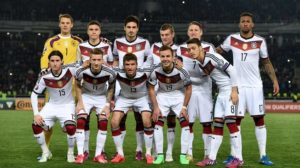 The Germans have enormous quality between the sticks. So much so that whichever three goalkeepers are chosen, will almost always be better than other countries’ first choice. Neuer is synonymous with the sweeper keeper role and, although he is injured until 2018, will be first choice should he regain fitness in time. Ter Stegen, so often the saviour for Barcelona in the last couple of seasons, will surely be regarded as the best back-up keeper in Russia. Whilst the final spot will be contested between Leverkusen’s Bernd Leno and PSG’s out-of-favour Kevin Trapp.

Bayern Munich could boast 75% of Germany’s back four in Russia. In Mats Hummels and Jerome Boateng Germany will contest the World Cup with the same centre back pairing that won them the competition back in 2014 but fitness may be an issue. Boateng, especially, has struggled with injury, playing a part in only 35 Bundelisga matches since the start of the 2015-16 season. Possible replacements at centre back include Bayern Munich’s Niklas Sule, Arsenal’s Shkodran Mustafi or recent Chelsea signing Antonio Rudiger. The void left by Phillip Lahm, after his retirement in 2014, has only recently started to fill up again thanks to the brilliance of Munich’s right-back Joshua Kimmich. He has played an integral part for Bayern in recent seasons and started every match for Germany in their Confederations Cup Success. He will surely be on the plane to Russia along with FC Koln’s full-back Jonas Hector.

In central midfield, Germany possess, arguably, the best player in the world; Toni Kroos. The deep lying midfielder controls the tempo of the match and has the ability to unlock defences instantly. Alongside Kroos, it will be a close battle between late-bloomer Sebastian Rudy, and injury-prone players Sami Khedeira and Ilkay Gundogan. Gundogan has recently returned for Manchester City after being out for months with a torn ACL and, provided he stays fit, I would expect him to start at the World Cup.

Germany are blessed with a multitude of attacking midfielders, displaying a deadly combination of pace, power and precision. Mezut Ozil is one of Germany’s most important, from Low’s perspective, and will always start when fit. Of all the injury-prone players Germany hold, Borrussia Dortmund pair Mario Gotze and Marco Reus are top of the list in terms of quality. On their day, the two of them are irresistible but these days are few and far between. They are both on the comeback trail from recent injuries and, should they remain healthy, will be potential starters for the team. Manchester City’s rising star Leroy Sane has had a remarkable start to his career for the Premier League club, scoring 15 goals in his first 49 matches and will be a firm favourite to feature at this year’s World Cup.

Joachim Low, in the past, has favoured playing a more unorthodox number 9 in Thomas Muller. But the rise of RB Leipzig’s Timo Werner could change things. Werner scored 21 times in 31 Bundesliga matches last season and looks capable of leading the line for Germany. 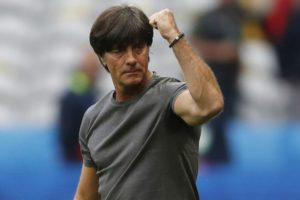 Joachim Low has revolutionised German football since he took over from Klinsmann in 2006 and has transformed Germany into an attacking powerhouse once more. Prior to the Germany job, Low managed Stuttgart and Fenerbahce among others but failed to reach the elite level in club competition so it was a surprise when he was announced as Klinsmann’s successor. But a big reason for his announcement was due to his rapport with the players. 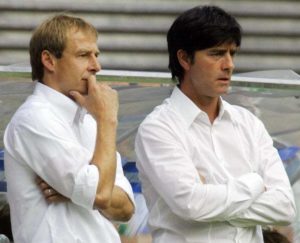 As Klinsmann’s number 2, Jogi (as they like to call him) was loved by all the players for the way he treated them; like grown-ups. He listened to their point of view and was flexible in his thinking. This unity, above anything else, persuaded the German board (DFB) to appoint Jogi as the new head coach of the national team. And boy has it paid off!

Low has coached Germany to one World Cup, a runners-up spot at Euro 2008, and three semi-final defeats in the five tournaments he has managed. That is some improvement for a country that only made it to one final in the previous five. He has done all this whilst injecting an attacking style of play, winning over fans from around the world. Germany’s renowned organisation and discipline, along with Low’s impressive tournament record, will make them a formidable opponent.