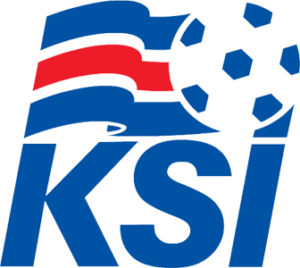 Iceland achieved the unthinkable and became the smallest nation ever to qualify for the World Cup. The country, that contains a population of approximately 335,000, set a record that may stand until the end of time. The previous record was held by Trinidad and Tobago, who accomplished the feat with a population of 1.2 million in 2005. This may help explain how impressive the achievement was. As a result, the bookies don’t give them much of a chance of succeeding and have calculated their odds at around 200/1 to win the tournament outright.

But if anything changes, DickieBet will be your place to go. You can take advantage of our free offers that can give you the freedom you need.

Iceland to win the World Cup

Iceland, the country that brought the wonderful ‘Viking Thunder-Clap’ to our attention, will not just be happy to turn up, however. They will be expecting to compete and hope to cause real issues to some of the bigger teams. England won’t need reminding of this after their Euro 2016 debacle. They are an incredibly organised team and have proven to be very difficult to break down. Until their 5-2 hammering against France at Euro 2016, they had only conceded four goals in as many games during the European Championships. Some of the teams they faced included eventual champions Portugal and England. The moral of the story is they will not be a pushover for any team.

This is the second successive tournament they have qualified for. And although this may have come as a surprise to the unfortunate former player Aaron Johannson (see tweet below), it came as anything but to the rest of those in Iceland.

This is Aaron Johansson – Played for Iceland U-21 then switched to ?? to have a chance of playing in World Cup.

The country places huge importance on player development and, since 2000, spent a large amount of money building ‘public training houses’. By the end of 2015 there were 179 full size pitches and 166 smaller-sized artificial pitches. According to the Icelandic Football Association (KSI), this amounted to one full-size pitch for every 128 registered players. Young players growing up in this period were, consequently, presented with enormous opportunity to play as much as they like. And it seems they have grabbed it with both hands.

Both current and retired players have shown their appreciation for the project and reiterated that without it, none of this would have been possible. It gave players of all ages, race and talent a platform to express themselves. Even those living in the smallest villages were close to a full-sized pitch. This, coupled with the fact that Iceland hold an extraordinarily high number of qualified coaches (639 at the end of 2015), gave all the youngsters an equal chance of making it professionally.

Teams are starting to take notice of the Icelandic players as more European clubs are snapping them up. There is now a larger percentage of players competing in England, Germany and Italy’s top division than ever before, improving the quality of the squad as a whole. 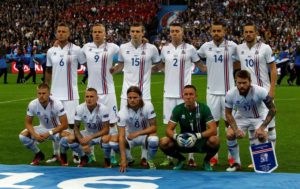 Hannes Halldórsson is the undisputed number one. The 33-year-old goalkeeper is the most experienced in the squad and started every single match, bar one, in the successful qualifying campaign. Halldórsson plays his football at Danish club Randers, finishing 7th in the league last season. Iceland’s number two Ögmundur Kristinsson is very much the deputy, only featuring in dead rubbers or when Halldórsson is unavailable. Kristinsson, 28, signed for Dutch Eredivise team S.B.V. Excelsior at the beginning of the season, starting six of their opening nine league matches.

Iceland had one of the most settled defences in qualifying, with three of their back four playing together in eighty percent of the matches. Birkir Már Sævarsson, 32, Kári Árnason, 35, and Ragnar Sigurðsson, 31, provide the know-how and composure needed at the top level. They also offer contrasting experiences, playing in the Sweedish, Scottish and Russian leagues respectively. Hörður Björgvin Magnússon, 24, and Ari Freyr Skúlason, 30, will battle it out at left-back. Skúlason has, for so long, been first choice but Bristol City’s Magnússon has been improving steadily and looks to be ready to compete at the top.

The Iceland manager, Heimir Hallgrimsson, has predominantly played a classic four in midfield. Aron Gunnarsson, the captian and engine of the team, is of huge importance in the middle of the pitch. He is the second most capped player in the team, and at the youthful age of 28, still has a lot to give. Alongside him has been the slightly more senior Udinese midfielder Emil Hallfreðsson. Whilst English-based duo, Jóhann Berg Guðmundsson (Burnley, 26) and Birkir Bjarnason (Aston Villa, 29) are usually deployed out wide. This gives star man Gylfi Sigurðsson, 28, the freedom to roam in behind the striker. He is their most productive and influential player with 18 goals in 54 appearances. His goals were one of the main reasons Iceland have qualified for the last two competitive tournaments. They will hope he is in the same kind of form going into the summer.

Iceland switch between playing one or two upfront. Reading forward Jón Daði Böðvarsson, 25, has got the nod in recent matches. His record, however, of only 2 goals in 36 appearances will need improvement if he is to start more regularly. Alfreð Finnbogason, 28, plays in the German Bundesliga with Augsburg and has started off the season well for them scoring four goals in seven matches. As Iceland’s main striker, scoring 11 in 45 for the national team, he will shoulder a lot of responsibility going forward. 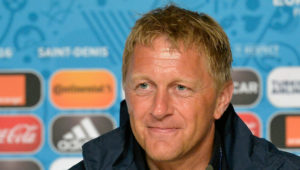 Heimir Hallgrimsson, 50, took over the role as full-time manager after the success of Euro 2016. Until then, he had shared the role with now-Norway manager Lars Lagerback, 69, whilst practicing as a part-time dentist. They have instilled a professional set-up to the national team and devised a certain way of training that they had the utmost confidence in. Previously, he admits, they may have changed the training set-up regularly, depending on what the more high-profile players wanted. A time when it was taken less seriously. But now they have a “strict rule” in how they do things and all the players have to buy into it. This is what makes them such a dangerous opponent.

As the full-time manager, Hallgrimsson carries out the majority of the video analysis. He is always looking to find ways of improving the team and is never content. And there is a tremendous drive to push the national team to even greater heights. A huge amount has been learned in these last four years. In particular, how the team “went overboard with excitement” before the 2014 World Cup play-off tie with Croatia that they eventually lost. But that gave Hallgrimsson the confidence and belief that they could qualify for the 2016 Euros and the 2018 World Cup. He was so confident, in fact, that halfway through their European qualification campaign, he asked the players to pick which base camp they wanted to stay at from a choice of three. This was only five games in!

This is just an example of the dramatic change in mentality Hallgrimsson and Lagerback have helped facilitate. They have brought the fans and players onside, along with the media. Hallgrimsson’s excellent communication skills have also improved the player’s confidence. And, as such, they will be a formidable opponent for any team facing them this summer.