were the final team to qualify for the World Cup after a 2-0 victory over New Zealand in the Intercontinental playoff. This ended their 36 year wait for a World Cup berth after being absent since 1982. And they will look to those previous generations for inspiration. The national team have appeared in four previous tournaments, three of which came between 1970 and 1982. During those successful years, they reached the quarter final in 1970 and the second round in 1978.

They have a nicely balanced squad, with a good mix of experience and youth. The older players can help guide the rest of the team through the A number of players surpassed a half-century of caps.

Peru scraped through to the playoff position, edging out Chile on goal difference in the South American group. Their fate was decided in the final match of qualifying after a controversial draw against Colombia. And the manager will argue it was deserved after some impressive results against the likes of Uruguay, Argentina and Colombia. Peru won 8 of their 20 qualifiers, scoring 29 goals and conceding 26. They kept five clean sheets along the way, including one against Argentina, a 0-0 draw, in the penultimate match. The fans then celebrated qualification so wildly that an ‘Earthquake’ warning was triggered in the capital city of Lima. 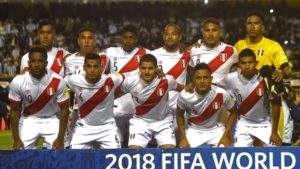 Pedro Gallese became the country’s first choice keeper after the  2015 Copa América. The 27-year-old fractured his wrist in August 2017 but was given the nod to play in Peru’s remaining qualifiers. He went on to keep clean sheets in three of the team’s last four matches, helping them secure qualification for the first time since 1982. Universitario’s Carlos Cáceda is back-up, featuring in a couple of qualifiers.

The Peruvian defence is led by captain Alberto Rodríguez. The 33-year-old Universitario centre-back has been around for years racking up a total of 72 caps so far and it is vital that he is fit for Russia. He has had a few partners at the back, including the experienced Christian Ramos. Ramos plays his club football for Brazilian team Flamengo. The two of them were utilised the most during the campaign but Miguel Araujo also played a part. In the full-back position Flamengo’s Miguel Trauco and Universitario’s Aldo Corzo were played for a large majority of qualification. They were both fairly inexperienced at international level prior to the campaign but adapted incredibly well. Former Hoffenheim right-back, Luis Advíncula, also played a crucial role, taking part for the full 90 minutes against New Zealand

Feyenoord’s Renato Tapia and Orlando City’s Yoshimar Yotún provide the rock in midfield. They are both versatile midfielders but have predominantly been used in the holding role. Their job is to break up the opposition’s attacks and they did that well overall. Further forward, São Paulo’s Christian Cueva and Danish club AaB’s Edison Flores were the creative forces. Together they scored a third of Peru’s total goals (Cueva with 4 and Flores 5). They will be a great outlet for Peru this summer with their attacking intent.

Peru used a few strikers throughout the campaign, utilising them out wide on occasion. They have a couple of ageing forwards in Lokomotiv Moscow’s Jefferson Farfan and Flamengo’s Paolo Guerrero (both 33). This will, thus, be their only chance to shine in a World Cup tournament and they will be raring to go. Guerrero did not feature a huge amount in qualifying but he is Peru’s all-time leading goalscorer and will be a huge asset to the squad. Whilst, Watford’s André Carrillo started 9 games and will be fighting to be in the eleven that face  Denmark on the 16th June.

After coaching a number of South American clubs, including Brazilian side Palmeiras, Ricardo Gareca was hired as Peru manager in 2015. He was given the thankless task of guiding Peru to their first World Cup in 36 years.

And qualification was extra special for Gareca after he was cruelly denied an opportunity to go as a player with his native Argentina in 1986. Gareca scored the goal that guaranteed his home nation their place in Mexico, ironically against Peru, but he was later excluded from the squad that would go on to lift the trophy.