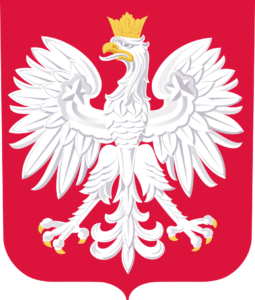 Poland will be participating in their eighth World Cup finals this summer. However, this will be their first in 12 years after struggling for a period of time. And 1986 was the last time they progressed past the group stages, exiting early at at both the 2002 and 2006 World Cups. But the players will go to Russia with huge confidence after Fifa ranked them sixth in the world. This was due to an impressive few years, which peaked when they reached the quarter finals of Euro 2016; the first time they advanced past the group stage of the European Championships in their history. As a result, a lot of teams will be wary of their strengths and will want to avoid facing them.

You can see how they fare this time around using the DickieBet website. We will keep you updated with all the latest odds and provide opportunities for you to enjoy some free bets. 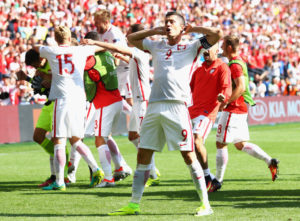 Poland possess a huge amount of quality, with the likes of Juventus’s Wojciech Szczesny, West Brom’s Grzegorz Krychkowiak and Bayern Munich’s goal machine Robert Lewandowski. They look electric going forward at times, with Lewandowski, 29, leading the line brilliantly. He is one of the best strikers in the world and finished as top scorer in the qualification campaign with 16 goals in 10 games. Consequently, they will be a danger for any team and will not want to be faced in the knockout rounds, should they get there.

Biało-czerwoni (The white and reds) qualified comfortably for the World Cup, finishing five points clear of runners up Denmark. They won eight of their ten matches, including an impressive 6-1 thrashing against Armenia and a 3-0 win in Romania. The only blip came in their embarrassing 4-0 defeat to Denmark where they really struggled defensively. They responded strongly to that defeat, though, winning their last three matches, scoring 13 goals along the way. 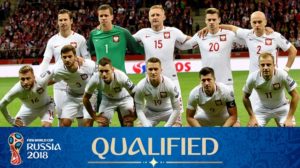 Poland possess two strong goalkeepers in Swansea City’s Łukasz Fabiański and Juventus’s Wojciech Szczęsny. Szczęsny only started 3 matches in qualifying after a difficult season for the Italian club last year, regularly playing second fiddle to Gianluigi Buffon. In contrast, Fabiański played in 37 of 38 matches for Swansea and has started in all 12 matches in the 2017/18 season as well. This has given him the edge in terms of a starting position. Artur Boruc‘s retirement in March 2017 has given Roma’s Łukasz Skorupski the third and final place in the squad. These should be the keepers participating in Russia.

Borussia Dortmund’s Łukasz Piszczek picked up a knee injury in Poland’s final group game that could see him out for a number of months. He will definitely miss the remainder of 2017 and there will be concerns he could miss the World Cup as well. If so, he could be replaced by Sampdoria’s 25-year-old right-back Bartosz Bereszyński, who has also been played on the left hand side. Legia Warsaw left-back Artur Jędrzejczyk has also featured a lot, starting six of Poland’s ten qualifiers, and could be their starting left-back in the summer. In central defence, Legia Warsaw’s Michał Pazdan and Monaco’s Kamil Glik have been regular starters. They have played together in seven qualifiers, with Glik also netting in Poland’s 3-0 victory over Kazakhstan.

Poland switched between a 4-2-3-1 and 4-4-2 throughout their campaign, with a number of central midfielders being utilised. These included; West Brom’s Grzegorz Krychowiak, Sampdoria’s Karol Linetty and Legia Warsaw’s Krzysztof Mączyński. Krychowiak, in particular, has impressed in recent years helping Sevilla win successive Europa League titles. And after a difficult season at PSG, found himself at West Brom. Jakub Błaszczykowski has also seen better days, but the former Borrussia Dortmund player is nearing a century of caps for the national team. There should be a place in the starting XI for him after contributing a goal and assist from the 10 qualifiers he played in. Hull City’s Kamil Grosicki and Napoli’s Piotr Zieliński have also featured a lot during the campaign and should be fighting for a starting place in Russia.

The Polish fans will be hoping that Robert Lewandowski stays fit for the World Cup. In Lewandowski, they have one of the best strikers in the world. And just like England with Harry Kane, they have the possibility to beat anyone purely on that basis. He recently broke the European record for the most amount of goals in a qualification campaign with 16 goals, and will be relishing the chance to break more records this summer. Anderlecht’s Łukasz Teodorczyk and Napoli’s Arkadiusz Milik should also make the squad, although they will mostly play as back-up. Milik got the move to Napoli after an impressive 2015/16 season for Ajax, scoring 24 times in 42 appearances. 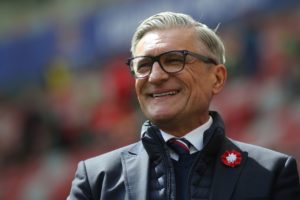 Adam Nawałka has been in charge of the Poland national team since October 2013. He has had a more unusual career leading up to where he is now.

Nawałka was a promising player and at the 1978 World Cup was considered one of the most exciting players. However, from that summer on he was plagued by injuries and was forced to retire in 1985, at the age of 29. He then emigrated to the U.S with his wife to get away from communist regime. Football was very much on the back burner at this point with his main priority earning some money through labour jobs.

He returned to Poland in 1990, after the fall of communism, but remained distant from football for a while. He chose, instead, to focus on running a couple of businesses with his wife for the next few years and only decided to pick up football again in 1995. At this point he had earned his coaching badges, and started to take coaching jobs. He remained in the lower tiers of Polish football for around a decade, before obtaining a job as Poland’s assistant coach in 2007. This only lasted a year as he went back to club football in Poland.

But his big break came in 2013, thanks to some impressive results at Polish side Górnik Zabrze. They were riding high in the Polish first division when Nawałka was offered a position as head coach by the Polish FA. He grabbed it with both hands and has been doing some brilliant work with the players. The most important aspects of his success with Poland are the improved team spirit and the focus on tactics. This meant that the Polish Football Federation no longer called up foreign players of Polish descent.