Just like Croatia, Serbia recently became independent and the 2010 World Cup was the first tournament they competed at as a new nation. They were knocked out in the group stage then and it will be hard to see them better that performance this year after being placed in pot 4. The last time they advanced past the group was in 1998, as FR Yugoslavia, where they lost 2-1 to Holland in the last 16.

Serbia are slowly becoming a force on the world stage. They boast a large number of high quality players, most of whom are playing in the top European leagues, so will be a difficult team to beat. The players are experienced at international level, with a lot of them winning over 50 caps, which will stand them in good stead heading to the World Cup. With the likes of Nemanja Matić, Branislav Ivanović and Aleksandar Kolarov they have a lot of know-how in the dressing room when it comes to winning trophies.

Serbia qualified as winners of Group D, losing just the one game. They saw off the challenge of Republic of Ireland, Wales and Austria along the way. But they were a little too easy to get in behind at times, conceding 10 goals in 10 games, whilst only managing four clean sheets in the process. This, however, was counteracted by their strength going forward. With Southampton’s Dušan Tadić and Newcastle United’s Aleksandar Mitrović, they possess a great amount of technical ability and both players helped the team score for fun. 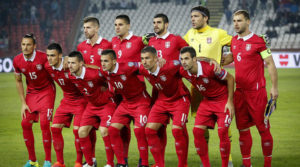 Partizan’s Vladimir Stojković is Serbia’s out and out number one. The 34-year-old made his debut over a decade ago, in 2006, collecting 78 caps along the way. He started 8 of their 10 qualifiers, conceding 8 goals in the process. Predrag Rajković, of Maccabi Tel Aviv, is Stojković ‘s understudy, filling in when needed. The 22-year-old is readying himself to become number in the next few years and made two qualifying appearances.

Serbia’s defence have been around the block. Three of their strongest back-five are into their thirties and this could be one of the last tournaments they play together. Former Chelsea legend, Branislav Ivanović, is a stalwart of the Serbian team, and recently made his 100th cap. He played every game in qualifying, leading his team to success. Roma’s Aleksandar Kolarov and Villarreal’s Antonio Rukavina played together in 80% of Serbia’s matches as wing-backs. They were on opposite flanks but contributed offensively with an assist each.

Premier League duo Luka Milivojević and Nemanja Matić have been certainties in the middle of the park. Crystal Palace’s Milivojević started in 8 qualifiers