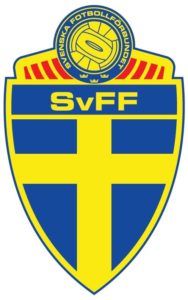 Sweden have had a tough time of late, failing to qualify for the last two World Cups, in 2010 and 2014. This is in stark contrast to Swedish teams of the past who were always tough to beat. They finished third in the 1994 World Cup, before reaching the last 16 at both the 2002 and 2006 tournaments. They remained unbeaten in the group stage across all three tournaments, and have not lost a group match since 1990. It is incredibly unlikely for this run to continue, given the fact they were drawn with holders Germany. But they can always dream.

DickieBet will keep the odds updated, and will be on hand to help compare the best ones on this site. They will also provide regular opportunities to take advantage of some free bets throughout the World Cup.

The inevitable question was whether Sweden would be able to replace Zlatan Ibrahimovic’s goals, after his retirement in 2016.  And Al Ain striker Marcus Berg has answered this with a resounding yes. Over the course of the campaign he netted 8 times, including four goals against Luxemborg in one match, and although he may lack the quality of Ibrahimovic, he has certainly helped fill the void with these goals. They also have the qualities of veteran Sebastian Larsson. The Hull City midfielder is a set piece expert and can change the course of a game with one delivery. There is enough quality in the team to cause an upset, as was seen in their match with Italy. 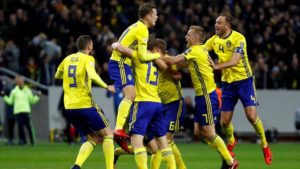 Sweden edged out the Netherlands and Bulgaria to a playoff spot in what was a tough group. And it only got tougher as they were drawn against four-times world champion Italy. But the Swedes were incredibly resilient in their 1-0 aggregate victory over the Italians, and rarely gave their opposition a sniff. They were even more impressive in their overall campaign, making the Friends Arena a fortress. They had a formidable record at home, going unbeaten the whole campaign where the team enjoyed a famous win over France, before demolishing Luxembourg 8-0 in a match that all but sealed their playoff spot. 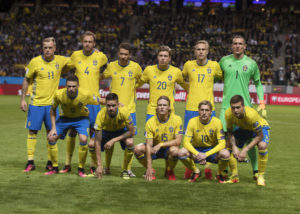 Robin Olsen is currently the undisputed number one. The 27-year-old FC Copenhagen player has featured in every qualifier for the national team, keeping seven clean sheets in total. The other likely candidates to join him on the plane are Guingamp’s Karl-Johan Johnsson and Swansea City’s Kristoffer Nordfeldt. They have both featured in friendly matches over the last two years but are yet to make any competitive appearances. Nordfeldt made his Sweden debut in 2011 but has struggled to cement his place in the team, mainly due to a lack of playing time in Wales.

Sweden’s best center-back pairing contain a mix of experience and youth. Veteran captain Andreas Granqvist, 32, and Manchester United’s rising star Victor Lindelöf, 23, complement each other brilliantly. And this solidity at the back is a big reason the team qualified for the World Cup. Celtic’s full-back Mikael Lustig has featured heavily in the Sweden team. With the 30-year-old has making 63 appearances, and counting, for the national team, he looks to be going to the tournament as their starting right-back. The left-back position, however, has been more competitive over the last couple of years. At the beginning of the campaign Swansea City’s Martin Olsson was a regular. But since the beginning of 2017, Ludwig Augustinsson has become a firm favourite. It now looks as though Olsson will be playing second fiddle to Werder Bremen’s Augustinsson, 23, in Russia.

Manager Janne Andersson usually deploys a classic 4-4-2 with two wingers, giving Emil Forsberg and Jimmy Durmaz the freedom to cause havoc out wide. They play their club football in the German Bundesliga and French Ligue 1, respectively. RB Leipzig’s Forsberg scored four goals in qualifying, with Toulouse’s Durmaz notching just the once.

Since the retirement of Zlatan Ibrahimovic, Al Ain‘s Marcus Berg has found a new lease of life. The 31-year-old scored 8 goals in 10 qualifying matches, when previously he had only managed 10 in 40 appearances. He finished as Sweden’s top scorer in qualifying but will still find tough competition in Toulouse’s Ola Toivonen and Celta Vigo’s John Guidetti.

The Man in Charge 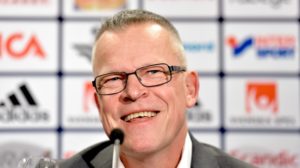 Janne Andersson took over Sweden when the team’s morale was at a new low. This was in the summer of 2016 when the team had just crashed out of the European Championships without winning a match and Zlatan Ibrahimovic, their captain and talisman, had announced his retirement. But he came in with a fresh approach. He realised how low the team’s confidence was and so made a point to announce his tenure as “a new chapter for everyone”.

Andersson’s whole career, both playing and managing, has been in Sweden. There will be very few people who know much about him outside of the Scandinavian region but within his native Sweden he is a cult hero. At least to those IFK Norrköping fans. He surprised everyone when he lead IFK to the league title in 2015, defeating giants Malmö FF in the final game of the campaign. This alerted the Swedish FA a few months later, who acted swiftly, to tie up the Swede’s services.