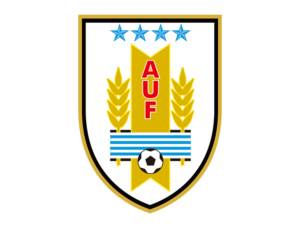 Uruguay will be participating in their 13th World Cup finals, becoming the third most successful South American nation. They clinched qualification by finishing second on the final match day thanks to a 4-2 win over Bolivia. As a result, this will be their third successive tournament, having reached the semi-finals in 2010 and the last-16 in 2014. A strong history has been established by the national team, only failing to get out of the group stage on three occasions. As such, they will be hoping and expecting another successful tournament.

They will be considered one of the dark horses for the title, with odds of 40/1 at Paddy Power. You can also take advantage of some free bets courtesy of DickieBet. 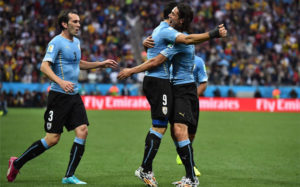 The Uruguayan’s are going through a transitional phase as a large majority of their star players find themselves on the wrong end of thirty. But Luis Suarez, 31, Edison Cavani, 31, and Diego Godin, 33, are still playing well enough to propel their country to a potential third World Cup victory. They have the ability to win matches on their own. However, the three of them have frequently been injured or rested in qualifying and yet the team still managed to qualify in second place. Consequently, there is a bigger depth than given credit for and they will be a tough opponent for any team in Russia 2018. 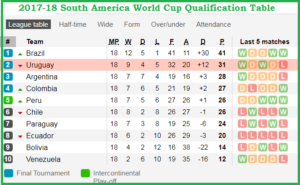 This was the first time, since play-offs were introduced in 2002, that Uruguay qualified automatically. They stuttered towards the end of qualification, picking up 8 points from their final 7 matches, but had made sure of their automatic position prior to the final game. This was an efficient, if not spectacular, campaign, finishing as the second highest scorers (behind Brazil) but struggling a little defensively. However, La Celeste picked up some brilliant results along the way, winning comfortably against Colombia and Chile, whilst also gaining a point in Brazil. Huge improvements will be necessary, especially in defence, but they will be satisfied with their qualification campaign.

Who’s the Man in Charge?

Oscar Tabarez, nicknamed “El Maestro”, has been at the helm for over a decade, reproducing the success of old. He came back, for his second spell in charge, in 2006. A time of struggle for the Uruguayans. They had failed to qualify for the 2006 World Cup and had been knocked out in the group stage in 2002. But Tabarez transformed their fortunes.

Since “El Maestro” took over, he has led them to a World Cup semi-final in 2010 and a Copa America title in 2011, as well as qualifying for three successive World Cup tournaments. The 70-year-old is a true footballing man and an academic. He strongly believed in keeping a national identity within the team and was saddened by the way football had become a globalised sport. He hated losing some of their most promising youngsters at such a premature age. And there was a worry that they would lose their roots, forgetting what playing for their country should mean. So much so that he frequently had all the European-based players take a crash course in the historical identity of the Uruguayan team.

Additionally, Tarabez built his team with resilience. There was a realisation that the team were not the most talented but he built a unit. He made them efficient and tough to beat. On their way to the semi-finals in 2010, Uruguay had less possession than their opposition in every match. But still managed to win 4 out of the 7 games played. He was able to take advantage of the clinical finishing Suarez and Cavani possess. This has helped turn their fortunes around and has, once more, brought Uruguay to the forefront of South American football. They will be ones to watch at the 2018 World Cup.